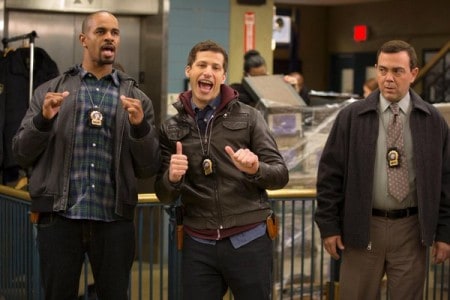 In tonight’s episode of Brooklyn Nine-Nine, Jake was confronted with a dilemma that many of us have experienced at some point in our lives. What do you do when two of your good friends meet each other and don’t get along? Anyone in this situation would love for both friends to become friends themselves but that is not often the case. Instead, in this episode, we saw a jealous Boyle who felt like Jake’s old partner Stevie was trying to take his place as Jake’s best bud. This led to an interesting look at who Jake used to be compared to who he is now, as he tried to juggle both friendships without leaving out either of the men.

When the Nine-Eight, a neighboring precinct, was temporarily forced out of their building, the Nine-Nine was chosen to accommodate them. To Jake’s delight, this meant his old partner Stevie, played by the hilarious Damon Wayans, Jr, would be joining them for a while. As the two immediately picked up from where their friendship left off, sharing inside jokes and reminiscing, it didn’t take long for Charles to become jealous. In a lot of way, Stevie represented the Jake we saw at the start of the shows run, the immature goofball whose main concern was how cool he looked doing the job. Between Boyle’s friendship and Holt’s role as a mentor, Jake has grown a lot (although still an immature goofball at heart). That being said, Charles then represents the more mature and by-the-rules side of Jake, who would do anything to help his friends and solve cases.

Throughout the episode, Jake was torn between these two sides of himself. He wanted to reconnect with Stevie but also refused to leave Charles out (except for that one time that they literally left him behind). Jake did everything he could in an attempt to include Charles and bring both his friends together, but in the end they were simply too different of people. When it came down to it, and Charles caught Stevie planting evidence to make an arrest on a known criminal, Jake proved that Charles’ friendship really has had an effect on him, knowing that they had to report his friend. Would the old Jake have made the same decision? It’s had to say but chances are that if he didn’t have an influence like Charles in his life, he might have let it slide. We’ve seen Jake grow a lot this season, through his relationship with Amy and his friendship with Charles. The writers have managed to show this change while still having Jake remain the same sometimes over-the-top goofball we all were drawn to at the start of the series (as evidenced by the fist fight that proceeded to take place between him and Stevie).

While the Jake/Charles/Stevie bromance triangle provided some laughs, the true comedy of the episode was carried by the rest of the Nine-Nine…and the Nine-Eight. Our beloved precinct didn’t handle the arrival of new desk mates very well. Some, like Holt, tried to act as though it didn’t bother them, determined to play the good host. Others, like Rosa, Amy, Terry and essentially everyone else, weren’t so concerned with accommodating their guests. Amy and Rosa’s approach to the disturbance was by far the best part of the episode, as they both became very angry and hostile. This is something you would expect from Rosa, but seeing Amy get just as worked up, if not more so, was unexpected and amazing. Between the woman at Rosa’s desk who looked up recipes and lamented on not having the time to make them and the man at Amy’s desk who had a service dog that he didn’t really need, Amy and Rosa made sure everyone knew how unhappy they were with the arrangement.

It was Terry, who has taken on more of a leadership role this season, who was tasked by Holt to keep everyone in line. But after having his whole computer stolen by a Nine-Eight employee, even he could not stand being in the same room as them. When Terry, Amy, and Rosa stumbled upon Hitchcock and Scully hoarding the microwave outside, they followed suit, moving all the equipment they needed outside so they could finally get some work done. Terry viewed this as a creative solution to the problem, one in which everyone was happy.

Holt, who despite his frustrations was trying to hide his true feelings, did not approve of Terry’s solution, thinking that it was rude to avoid the others. In the end though, we saw that even Holt has his limits and when a fist fight broke out between the two precincts, he discretely broke the radiator, effectively forcing the Nine-Eight to find somewhere else to work. He was willing to let his pride go and acknowledge that Terry was right and that sometimes you do need to come up with creative solutions to your problems.

Favorite Moments:
-Terry thinking “AF” stands for “As Frasier”
-“I once saw you use a ruler to measure another ruler.”
-Holt attempting to gossip with Gina. “So tell me about…boys.”
-Amy and Rosa chanting “Fraud Dog” and “Juice Ellen.”

Tensions rise when the Nine-Nine welcomes a neighboring precinct in another solid episode of Brooklyn Nine-Nine.