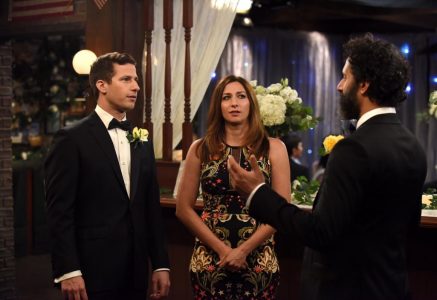 If you’re anything like me or Rosa, you perhaps thought you’d seen the last of Adrian Pimento when he failed to return to the precinct immediately after they took down Figgis. Thankfully, if you did believe this, tonight’s episode of Brooklyn Nine-Nine proved you wrong as the love of Rosa’s life returned, crazier than ever. And the two immediately picked up right where they left off, deciding not to waste any more time and instead get married immediately. Tasked with putting together a wedding in a short amount of time, a mission that Amy was born to lead, the squad succeeded despite facing many obstacles. But in the end, the biggest obstacle to the altar ended up being Rosa and Pimento themselves.

Most of the comedy of the episode came from Amy dishing out tasks for each member of the squad as we watched them attempt to complete them. In a shocking twist that no one could have seen coming, Hitchcock and Scully ended up being the most competent at their task, something they had been practicing for their whole lives: picking out the most comfortable chairs for the wedding. Meanwhile, Holt thought he was excelling at creating an elegant arch for the ceremony, deciding to construct it using balloons. However, Amy was less than impressed and made him destroy it. In the end, though, Holt was vindicated when Rosa saw a newly made balloon arch in his office, calling it magnificent (please give Andre Braugher all the awards for that scene).

It wasn’t just their inability to perform the tasks Amy assigned them that sidetracked the wedding however. Without even knowing that she was doing it, Rosa began to sabotage her own wedding in the most fun way ever: getting herself and other members of the squad drunk. As each character attempted to sober her up, she instead turned the tables on them as one by one, they each also got wasted. And the reason for each of them giving into the alcohol was incredibly in character. For Charles, it was the reminder that his girlfriend never wants to get married again that led him to drinking. For Terry, it was the realization that his little girls were going to grow up and wouldn’t always want to be close to him. And for Holt, it was the balloon arch failure. Amy was eventually able to sober everyone up but watching their decent was so much fun.

While all of this was happening, Pimento was also unknowingly sabotaging the wedding as he encountered sign after sign that the whole thing should be called off. Having gone on a road trip with Jake and Gina to find earrings his grandma had worn at her wedding which would bless the union, he easily accepted each setback in their goal as a sign that they shouldn’t get married. While Gina supported this train of thought, believing in signs from the universe, Jake wasn’t as quick to buy into it. He was able to convince them to work against the universe by finding the earrings and getting back to the wedding in time, despite Pimento calling it off numerous times because of their bad luck.

Meeting up right before the ceremony, Jake and Amy were able to come to an important realization from everything they had observed that day: Rosa and Pimento weren’t actually ready to get married. In a fun scene, Jake made Pimento see that he himself was the sign all along, trying to use the signs from the universe as an excuse not to get married when really it was his subconscious talking. And in another heart to heart that showed the strength of their friendship, Amy made Rosa see that perhaps she got herself and everyone else drunk because she didn’t want to face the reality that she and Pimento weren’t ready to get married.

So in the end, all of Hitchcock and Scully’s hard work with the chairs didn’t pay off, as Rosa and Pimento decided to call off the wedding for now and actually date each other like normal people instead. Though far from normal themselves, they realized that forming a strong relationship before getting married would be wise. Of course, it took help from Jake and Amy, who have a fairly healthy relationship themselves, to realize this. Which leads me to wondering, how far down the road until we see a wedding between those two? Perhaps a double wedding will be in the show’s future. Holt will be ready and waiting with a massive balloon arch when the moment arises.

Amy led the squad in planning a spur of the moment wedding for Rosa and Pimento in a very fun episode of Brooklyn Nine-Nine.