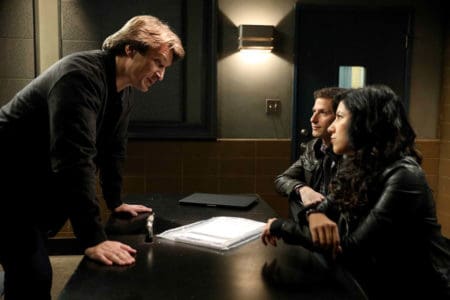 Brooklyn Nine-Nine has done a fantastic job of balancing the case-of-the-week formula with multi-episode story arcs, something they proved once again in tonight’s episode. With the threat of one precinct in Brooklyn needing to be shut down, the Nine-Nine was still in jeopardy, this week going up against an ex-girlfriend of Terry’s who had the power to shut them down. While Amy and Gina tried to get to the bottom of why Terry’s ex hated him so much, Holt and Charles took a different route, one which led to them almost compromising their morals. But there was still work to be done, as Jake and Rosa took on a case on a movie set which showcased their very different personalities.

Jake has always been a character who strives to be the center of attention, seeking popularity and adoration. So of course it makes sense that he dreams of being a movie star. Working a case on the set of a television show, he was immediately drawn in by the glamour and thrill of show business. In fact he was so drawn in, as he was offered a position working with the show, that he almost let it distract himself from the case he and Rosa were working.

Meanwhile, Rosa has always been a realist with a fairly negative outlook. This can be a useful trait for a detective as it allows her to not become distracted and instead stay focused on the case. But it can also be a burden, as she spent most of the episode stating that everything was awful, believing that the precinct would be shut down. Her focus and negativity led her to believe that the executive producer who was buttering Jake up was their culprit, but this was not actually the case.

In the end, it was a combination of Jake’s more carefree attitude (and dedication to the television show) and Rosa’s realism that led them to the right man and allowed them to solve the case. What they really proved in this experience though is that no matter how different they are and no matter what happens to the precinct, they will always be friends. One of the best parts of this show is their ability to take characters who are so drastically different from each other and form incredible bonds between them, something we see in the Jake and Rosa friendship.

The true comedy of this episode, however, came from the Charles and Holt subplot. The show decided to take two of the most moral members of the squad and place them in a situation that had them considering blackmail. Wanting to convince someone who had power over which precinct was cut to keep the Nine-Nine, they stumbled upon the realization that this man was having an affair. In a hilarious scene that involved a lot of raised eyebrows, Boyle tried to teach Holt how to subtly imply that they had dirt on the man.

Of course, the two ended up not being able to go through with the plan, only managing to confuse the man in charge of their fate with more raised eyebrows. When it came down to it, Boyle wasn’t willing to see Holt give up his unwavering morals to save the precinct. In fact, it’s those morals that Boyle respects most about his Captain and as a moral man himself, he knew it wouldn’t be right to resort to blackmail. Both Andre Braugher and Joe Lo Truglio were a delight to watch in this episode, as their by-the-books characters considered taking a step to the dark side.

With all of this going on, Gina and Amy tried to find out why Terry’s ex hated him so much, hoping that once they discovered the truth, Terry could apologize, and the woman would write a more positive review of the Nine-Nine. Amy’s misguided attempt at girl talk obviously failed so Gina and her were forced to interrogate Terry to discover the reason his ex hated him. It took awhile (and cost a wasted yogurt), but they finally uncovered the truth: Terry had waited a year to break up with the woman because her mom had passed away. His only mistake was giving her a gift with a receipt from the date he originally planned to break up with her.

Despite a sincere and heartfelt apology, one which his ex even accepted, it was too late for the precinct as the woman had already turned in her, admittedly negative, review. Left at the end of the episode with the fear that the precinct might be shut down, there is only one thing we can be sure of: no matter what the next episodes bring, this crazy group of people will remain together.

Jake and Rosa worked a case on a television set while Boyle and Holt considered betraying their morals in a fun episode of Brooklyn Nine-Nine.