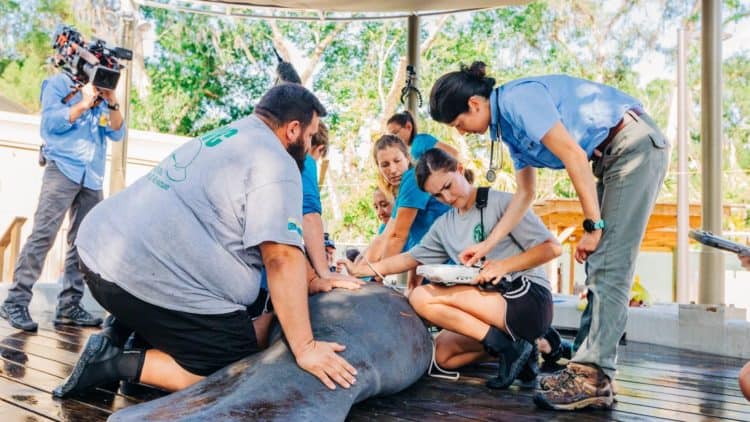 Sometimes a trip to the zoo brings up complicated emotions and ethical questions. It is fun to see all the cute and interesting animals but hard to see them in captivity. Shouldn’t they be out in the wild roaming free? To alleviate one’s zoo questions Michael Hutchins, PhD, director and William Conway Chair of the Department of Conservation and Science for the American Zoo and Aquarium Association states that are really two different kinds of zoos: AZA-accredited zoos, and zoos that do not meet AZA standards. He goes on to state that zoos serve important functions in society: education and conservation. And if that is not enough for you, beloved actress Betty White says: “People forget the good that zoos do. If it weren’t for zoos, we would have so many species that would be extinct today.” Nowadays there are many zoo documentary shows that showcase the conservation efforts done by zoos.  You can go to the zoo without getting off your couch.  Here are 7 zoo reality shows and some of their adorable human and fury stars.

This series tells the story of The Bronx Zoo in New York City. The Bronx Zoo opened in on November 8, 1899. The zoo sites on 265 acres and is home to over 6,000 animals made up of more than 700 species. It established the first modern animal hospital in 1916. Highlights in this series include the rescue of an orphaned snow leopard cub from Pakistan and an introduction of adorable Malayan tiger cubs to their new habitat. Human stars include husband and wife Jim Breheny, Director of the Bronx Zoo, and Kathleen LaMattina, Curator of Animal Encounters.  The passion for the animals and conservation shows.

Animal Planet’s Secrets of the Zoo

Secrets of the Zoo documents the Chester Zoo located at Upton-by-Chester, in Cheshire, England. The Chester Zoo is the most visited zoo in the UK and has 35,000 animals on 128 acres. This show uses micro-rig camera technology which allows the view to get an up-close and personal, detailed view of the animals. The animals are truly the star of the show.  The camera technology allows the viewer to get a never before seen intimate view. In a recent episode we see Dylan, the dominate male chimpanzee get distracted by cute females which allow the younger males to test the chain of command.

The San Diego Wildlife Alliance’s “front doors” as they call them are the famous San Diego Zoo and the San Diego Zoo Safari Park.  These world renowned facilities are dedicated to science, education, and conservation.  The parks are home to more than 6,500 animals made up of more than 700 species.  Season one highlights include a flock of ostriches named after the Spice Girls.  Season two highlights include a baby hippo named Amahle by the public and a conservation partnership with the Reteti Elephant Sanctuary in Kenya.

National Geographic Secrets of the Zoo

Secrets of the Zoo tells the behind the scenes stories of the Columbus Zoo and Aquarium and its conservation park The Wilds located in Ohio.  Jack Hanna, world renowned zookeeper, was the former director of this zoo and helped make it what it is today.  The zookeepers and veterinarian’s love for the animals really shines through in this series.  Dr. Priya, a Senior Veterinarian, often chokes up when talking about the work the zoo does.  She started a blood bank for giraffes.  Suzi Rapp, Vice President of Animal Programs, works tirelessly  for the survival of cheetahs, even hand raising some in her home.  You can tell how much the staff love their jobs and the animals they help care for.

National Geographic Secrets of the Zoo Down Under

Secrets of the Zoo: Down Under takes us to the shores of Sydney Harbor. The Taronga Zoo in Sydney is Australia’s largest zoo.  The series is narrated by Naomi Watts.  In the first episode of this series, we see the Taronga Zoo preparing to send a pair of platypuses to the San Diego Zoo.  This is historic because the San Diego Zoo will become the only zoo outside of Australia to have these unique creatures.  We also see the damage of climate change in this series.  When wildfires break out throughout Australia, the zoo works tirelessly to help save the animals impacted by the fires.  It is both heartwarming and heart breaking to watch.  We also witness the zoo saving a species of snapping turtles when a mysterious virus quickly threatens to wipe them out.

ZooTampa is located at Lowry Park.  The zoo sits on 56 acres and includes native Florida species such as the critically endangered Florida panther.  The Zoo also works to rehabilitate manatees at the David A. Straz, Jr. Manatee Critical Care Center. Human stars of the series include Dr. Ray Ball, who rides his bike around the zoo every morning to say hello to the animals, and Dr. Lauren, who is passionate about manatees.

The North Carolina Zoo is set on 2,600 wooded acres and is located just south of Asheboro in Randolph County.  It is the world’s largest natural habitat zoo.  It has over 1,800 animals in its care. Highlights include getting blood from a feisty gator and pulling a tooth from a lion.  Human stars include veterinarian JB and zookeeper Audrey who loves Eastern Indigo snakes.

It is now easier than ever to visit the zoo.  You do not even have to leave your couch and it’s educational.  You will learn about the animals, people, and places that these zoos are in.  All these zoos are AZA-accredited so you know you are supporting animal welfare, education, and conservation.  Sounds like a great reason to binge watch!