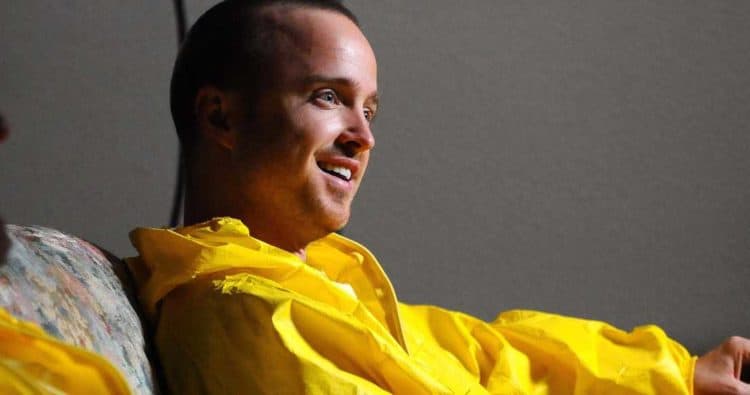 B. Alan Orange of MovieWeb is just one among several that’s trying to make it known that El Camino will be showing up in theaters for a few days this coming October for those that have the opportunity and want to check it out. If you can even think about what it might have been to watch Breaking Bad on the big screen then this will at least give you a small idea of what it could have been like. As a lot of people already know this will take place with Jesse Pinkman after he’s escaped the neo-Nazi’s that have been keeping him captive while he was forced to cook meth for them. Since Walt helped him to escape, at the risk of his own life, it’s obvious that Jesse is now on his own and is going to have a lot of personal demons that he’s going to have to work through, but what direction he’s going to go in is still hard to say.

Whether he’ll continue with the meth business, since he knows how to do it and that it can make some quick money, is hard to say since it’s brought him so much misery. But what else is he going to do? Jesse has a burned a lot of bridges along the path he’s taken and no matter how much of it might have been because of one reason or another, he’s done a lot of damage throughout his time on the show. Those that want to think Jesse is entirely innocent aren’t seeing that he’s been seen to get into it without hesitating at times even while at others he’s tried to get out. Jesse hasn’t really been shown to be a saint throughout the series, though at this point it almost feels as though he’s been due a bit of peace and quiet for a while. Walt turned out to be the devil in many cases, but again, Jesse wasn’t the harmless individual that some people want to see him as. In the coming movie though it’s kind of interesting to think about where his arc might go and how he might develop a bit further as things go along. The emergence of Skinny Pete in the short teaser that was released is enough to think that Jesse might be trying to cut ties with the world he entered when he fell headlong into the meth business with Walt, but again, without much else to move towards it’s hard to see just where he’s going to go and what he’s going to do.

As Nate from Barstool Sports might agree, Jesse has been a pretty troubled individual for a good part of the show and seems to be headed towards redemption at this point, but that’s not for certain. Can anyone really say for certain what kind of PTSD he’s going to be dealing with after all is said and done? For everything that he’s been through and everything he’s had to do to survive, Jesse will likely be suffering from PTSD issues that are similar to those that have lived in or been sent into war zones for a substantial portion of their lives. It might seem like an odd and even controversial comparison, but given all that he’s had to go through it wouldn’t be surprising to see him freak out a time or two in the movie since a lot of things could trigger him and possibly send him off the deep end. Since hooking up with Walt he was headed down a dangerous path that didn’t really have much hope for a happy ending since anything involving drugs tends to veer off into a very intense and fatal series of events that don’t lead to anything that a person could call ‘good’, unless they’re the one with the guns and the authority. Even then it seems like a very tenuous position.

Aaron Paul and Bryan Cranston brought a stunning and provocative show that was nothing less than amazing since it tackled a very prominent subject in America that is more than a little difficult to deal with and almost impossible to shut down. Their portrayal of a foul-mouthed high school failure and an aging and cancer-ridden chemistry teacher was spot-on and the devolution of both men as they continued to create a reputation of being the best cooks in their territory was stupendous. Judging the show by the way it started was something that could have derailed it in a big way, but instead it ended up creating something that people couldn’t help but enjoy. Breaking Bad was the kind of show that people easily became addicted to and the characters, Jesse and Walt, became fan favorites that many people felt close to no matter the things they did. Ben Travers from IndieWire and many others will no doubt agree that watching this movie on the big screen is bound to be something special.