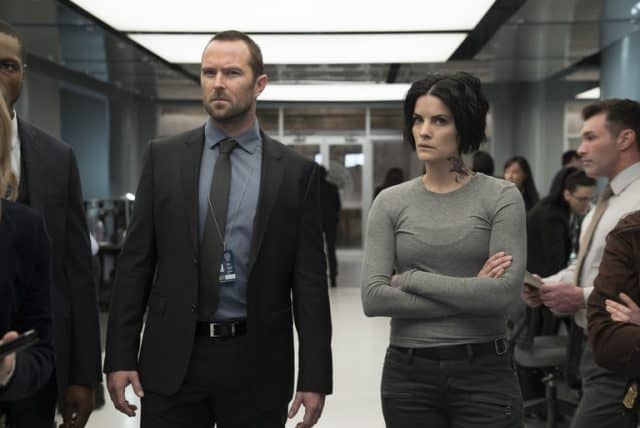 Blindspot returned from its hiatus last week with an action-packed episode that reintroduced us to our long-running arcs while providing some great new mysteries for the show to explore through the rest of the season. Let’s take a look at what happened in this week’s new episode, “Droll Autumn, Unmutual Lord.”

The episode opens with Roman (who may be a hero now?) in a very familiar situation: he’s essentially trying to recover his memories in the same way that we saw with Jane for a little over a season. It’s not that this is entirely uninteresting, it’s just that we’ve seen it before (in fact, we literally have seen the rabbit scene before, just from a different perspective). Luke Mitchell was an exciting addition to the cast for this season, but Roman always felt underused in the first half. The writers are obviously trying to turn that around now (and it’s clear that they had a plan for him from the get-go), but I don’t know if retreading this same ground is quite the way to do that.

With that said, it’s somewhat interesting to see the contrast between Jane’s memories and Roman’s. While Jane was, more or less, “good” and working toward a greater result, Roman’s life has been much more on the darker side of the spectrum. He’s much colder than Jane ever ways, so exploring that aspect of a familiar trope on the show could end up being enough of a difference to keep an audience invested. For now, though, I can’t say that it’s managed to capture me.

I’ve really enjoyed what the writers have done with Patterson this season, too, but even moreso since the reveal of Borden’s double-agent status. This is a woman who’s been through so much in such a short amount of time, and the way that she’s managed to recover is incredibly admirable. Ashley Johnson has been, possibly, Blindspot‘s greatest asset since the very beginning, and every situation that the character is put in makes that more and more clear. I also really love the fact that the writers are using Patterson so closely with Roman’s storyline, because it adds more interest to anything when Patterson is involved.

The romance that’s finally starting to boil between Zapata and Reade is fun to watch, and I admit that I’ve been rooting for these two since the beginning. I really hope that we don’t have to witness even more heartbreak after all we’ve been through so far.

This week’s Blindspot was much more lowkey than last week’s mid-season premiere, but that isn’t necessarily a bad thing. It’s important for the show to build the mythology of the show through the characters, but it has to make sure that it doesn’t sacrifice the overall arc in the process. It was fine here, but it could definitely be better.

While much more restrained than last week’s premiere, “Dull Autumn, Unmutual Lord” was a decent episode of Blindspot that shined in the places that it needed to while struggling in the areas that it could afford.