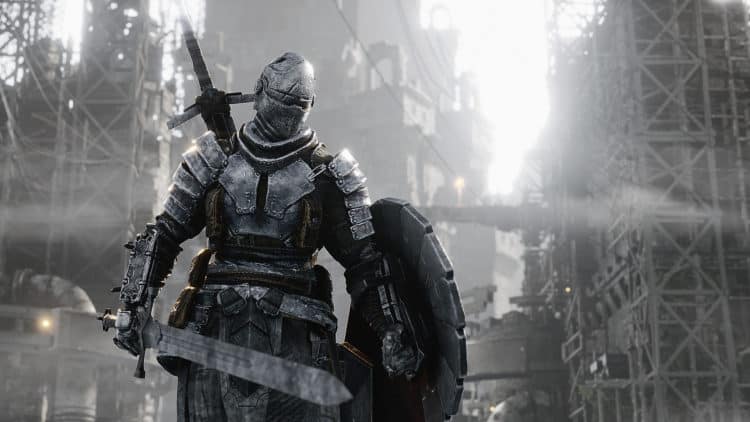 Bleak Faith: Forsaken is a new open-world RPG that is mixing things together to create something wholly original. Combining stealth gameplay mechanics and action-horror, this new title seems reminiscent of Dark Souls. It is easy to dismiss this game as another clone to the “Souls” games, but there’s a lot more happening under the hood. Players will take control of one of the “forsaken.” They must venture out from a distant outpost and explore the lands that are being corrupted by the Omnistructure. The key to surviving is adapting and constantly find new ways to survive on this dark terrain that’s shrouded by a growing evil. Being a mix of dark fantasy and cyberpunk, this game is ripe with lore and a recommendation for gamers yearning for something new.

This is an indie project that was fully funded by a Kickstarter campaign. It is being built by just two developers, Miso Vukcevic and Mirko Stanic. Their passion and inspiration for this genre are clear with the gameplay footage shown through a recent trailer. Even though this game is being crafted by a fundamentally small team, Bleak Faith: Forsaken will offer up to 30 hours of content. Given that this title is being made by a two-person team, this is actually an impressive feat. Even though this game might give off the same old Dark Souls vibe, there is a lot to learn about what this game is really about. With that said, this title does have potential and some rather interesting rogue-like elements that make it stand above its competition. On top of that, there are also some rather interesting ecosystem mechanics that give this game a unique sense of identity and a life of its own.

The Bleak Isn’t For The Weak

Bleak Faith: Forsaken is open-world and not really in the traditional sense. The entire world is one giant labyrinth, that is constructed in a way that branching paths intertwine. Players that remember the layout of the world in Dark Souls II will have a good idea of how this map will flow. One area will bleed into another area, that’s chock-full of secrets and hidden pathways. Areas will be broken up with gateways in which special keys will be needed to open. Therefore, it will have a Metroidvania format to where there will be constant backtracking and memorization required. The developers want to make a game that echos the same sense of wonder that the games of yesteryear evoked. Open world games these days are a dime a dozen. So, the developers want the world in Bleak Faith: Forsaken will feel both alien and familiar.

It’s not to say that there won’t be open areas to explore, because there will be. The map will have open core areas to poke around that come in the guise of forests, deserts, and more. Assorted enemies will cross players’ paths that range from zombies, mages, dark knights, and flying beasts. There will even be enemies that are so epic in scale, they will take up the entire screen. Of course, players will have safe havens to recover from their journey which are outposts. Here players can craft, upgrade and play around with augmenting their avatar. Bleak Faith: Forsaken will have a robust class system where players can build their avatar to their liking. Of course, the classes will determine how the combat will roll, just like with any other action RPG.

To Scavenge and Ravage

Scavenging for resources will assist in creating equipment in outposts. The combat in Bleak Faith: Forsaken will have the depth that is akin to any other AAA action RPG in the market. Of course, the class of the avatar will play a key part in how the combat will play. Players can go full stealth-like Metal Gear Solid, or use technomancy to make artificial appendages. If so desired, players can just hang back and use ranged weapons on their playthrough. With that said, if players prefer to stand toe-to-toe with foes, there will be a lot to learn. There will be a deep melee system where players will need to learn how to counter, dodge, block, and parry. The enemies will be bloodthirsty and every encounter is constructed to be a nail-biting experience. This game isn’t going to be a button-masher. There will be character and weapons stats to mind. The type of warrior players want to be is entirely up to them. They can fight every enemy that comes their way, or just avoid them completely.

Bleak Faith: Forsaken will come with an entire ecosystem to deal with. Not only are the enemies will be after the player, but also each other. Each playthrough will be a vastly different experience. If an initial playthrough had a predator stalking a player, making their life miserable, might find it gone the next playthrough. This is because various factions and tribes are always at war with each other. They’ll need to clear out areas so they can thrive. Hence, that particular predator could have been hunted down and killed before the player reached that area on their second playthrough. This game will offer an organic and ever-changing environment that won’t be static. At least, this will be true in the open-world areas. However, there will be linear pathways that players will need to take in order for the story to unfold. There will be no way to go around that. Thus, players will also need to hunt, evolve, and constantly adapt in order to stay off the menu.

There may be some concerns on how this title may be cutting a little “too close to the bone” with its Dark Souls aesthetic. However, its ambitious ecosystem mechanic and the layered class system might make this title a cut above the rest. There is still some work to do in regards to polishing, but this game is nearing completion. Players out there that are hankering for a dark, action RPG should keep their eyes on Bleak Faith: Forsaken. It is slated to be released this December for the PlayStation, Xbox, and PC.