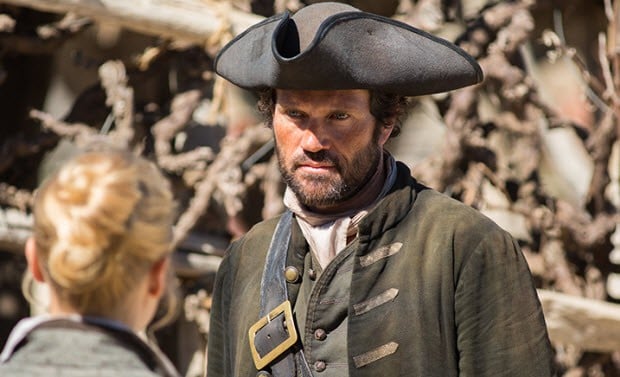 The Starz series Black Sails hit a little bit of a snag during episode 3 after a great episode 2. The fourth installment of the first season hooked us back in with imminent betrayals on the horizon. This may be a trend of the show, but if they can keep us hooked people will watch the entire season.

Catching up with the scurvy crew:

Billy Bones has been promoted to quartermaster, but you can tell he’s still very anxious about all the happenings around him. Billy made some moves in his new role; grounded the ship, set the crew to clean the barnacles, and set up a tent for the crew to enjoy themselves with some local women. However, it doesn’t go as planned and the ship is nearly lost. Billy will be an interesting character to keep an eye on as he is very uneasy about Captain Flint.

Captain Vane, who became one of the most interesting characters of the show, spent much of this episode sulking. That is, of course, until the end. Despite his strung out state, he’s able to kill the owner of Max’s new brothel and two of his men, which means Max will be back and we’re not sure that’s a good or bad things.

Not really sure what Anne Bonny’s role is in this show. She’s like Rackham’s sidekick and actually said a couple things this episode. I will say that her character could be poised for something – what it is we don’t know. As for Rackham it was a relatively quiet episode for him.

Eleanor’s dodgey position has Mr. Scott very uneasy. Her father is in negotiation with Captain Dyfed Bryson about various things, but Eleanor doesn’t trust him. Like we said last week, this is a huge storyline in the show. Eleanor and her father’s relationship. We get a glimpse of how explosive it can be when she acknowledges she’s willing to assassinate him to get what she needs. Eleanor’s judgement is very cloudy. She will do anything to stay in power. Ultimately, her string of terrible decisions leads to Mr. Scott throwing his favor back to her father.

John Silver is relegated to cooking duties and to no ones surprise he stinks at it. What he is good at is manipulation. He’s able to twist conversations and acquire information like none other on the show. The plot development that picked up here is the dynamic between Billy (who is uptight about Captain Flint) and Silver (who is looking to become buddies with Captain Flint – actually saying so). He may play Billy like a fiddle leading him to lose favor with Flint.

Lastly, we have Mrs. Barlow. She has a very strange influence over Captain Flint as a story was told about him killing innocents at her command. However, the truth comes out she’s actually Mrs. Hamilton, a disgraced ex-wife of a nobleman who went crazy over her infidelity with Captain Flint. There’s another interesting dynamic at play her. Flint seems to control her destiny, which is something she’s not to happy about. Cue Mr. Guthrie – offering her a chance to escape to Boston to relieve herself from Flint’s control. Sounds like we’re headed for a betrayal. How about that seen with the kid who throws rocks at her calling her a witch – perhaps something to note.

Overall, there wasn’t much action in the episode, but the ground is laid for some serious betrayal and plot development. We have the dynamic brewing between Billy and Silver, Mr. Scott and the Guthries, and Flint and Mrs Barlow. Then of course, we also have Rackham and Anne Bonny – something dodgey is going to happen there. Either way, there’s betrayal on the horizon.