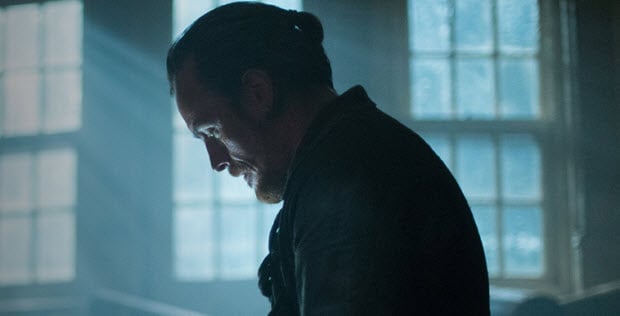 The Starz’ drama Black Sails continues to build up steam as we head to the first season finale in a few weeks. We’ve said it all along: this is a show that has tremendous potential, but has continued to fall flat time and time again. However, there are intriguing plot lines that are keeping much of the audience engaged – at least until the end of the season. Episode VII was really an opportunity for people to claim their right for power and make necessary moves for their future.

The major storyline of the show right now is this mystery letter that Billy Bones found about Flint’s intentions to betray his crew. Flint seems to exist on the edge of extinction, but he’s the main character which makes you wonder if his fate is one of Ned Stark or he endures. Anyway, with the idea that Billy is dead, Gates decides to confront Flint about the letter written by Mrs. Barlow regarding his betrayal of his crew. At first, Flint admonishes Gates, but then he realizes that Gates would easily walk away from him and betray him to the crew. Flint reveals this master plan about how he envisions himself to be the savior of his crew with delusions of this utopia. Gates doesn’t seem to buy it, but he’s sticking around for now. One of the more interesting developments is that Gates learns from Dufresne that the crew will stay with Flint until they are paid then betray him in retribution for Billy’s death.

Max sees an opportunity with Rackham, who is clearly not cut out to run a brothel. Apparently, his “employees” are robbing him blind and Max knows about it. Seeing a chance to advance herself she tells Rackham. How long before Max is running the show?

The character of Jon Silver has been disappointing to me. I thought this guy was going to play a larger role. In Episode VII, fellow mate Randall reveals he knows that Silver stole the journal page. Silver does he song and dance of manipulation we’ve seen a million times and gets Randall to reconsider spilling the beans. Not like they were going to kill him – he’s their ticket to getting paid.

Eleanor’s story is pretty boring in this episode. Now that she regained her power, she’s not trusting anyone, but she’s also dealing with a self-doubting captain. She finds a drunken Flint and reassures him that she believes in him and their mission to improve Nassau. Mr. Scott and Eleanor have a bit of a tumultuous encounter – clearly Eleanor isn’t going to forgive Mr. Scott for acting in her best interests. He does, however, get her to hire some slaves from the ship, then tells her he’s out.

Vane’s character is one that we love and think could do big things. That’s exactly what he’s plotting. He’s beginning to formulate his plan to steal Nassau right out from under Eleanor. He’s still on that remote island, apparently the place he was born, with who we think is Black Beard. He tries to win a crew by engaging in a battle. Despite losing the battle, he wins the war and the crew, by rising from the grave to kill his opponent. Vane is coming.

Lastly, there’s a bit of drama between Mrs. Barlow and Captain Flint. This story kind of annoys me – regardless, Mrs. Barlow wants to go to Boston, under a pardon, and live out the rest of her days. Flint thinks its garbage and doesn’t need to be bargained because he didn’t do anything wrong. To be continued…

As you can see, it was an eventful Episode VII. The story is building, but I just can’t put my finger on what is holding back this show. Is is holes in the plot? Is it poor acting? Either way, I feel like the premise of Black Sails could have been a home run, instead it’s just a decent show.