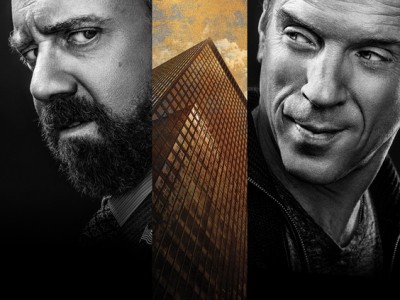 On Billions, you’re invited to believe, at first, that Wendy Rhoades is a neutral bystander. She’s caught in a war—one that she knows is going on all around her, but one that she chooses to ignore—between her husband and and her boss. The pilot would have you believe that her career is what is keeping her at Axe Capital, that she’s somehow beholden to this company over all others.

It wouldn’t be hard to convince yourself that she must be in the dark about who Bobby Axlerod really is. The first two episodes set him up as an arrogant, angry, rich douchebag, who unhesitatingly tosses overboard a friend in Steven Birch and employs a man like Hall, who would infiltrate the District Attorney’s office through the use of blackmail. He openly engages in acts like buying that house and buying the naming rights of that building strictly to let everyone know that, if they were to unzip zippers and lay it on the table, his would reign supreme.

But she knows. She knows exactly who he is. Wendy Rhoades walked right up to Victor and told him, flat-out, that Axlerod would ruin his life. She told him that he would blackball him from here to there, from one end of the Earth to the edge of the solar system. She’s an A-grade top-shelf psychologist, and she doesn’t miss anything. You might be tempted to believe that she’s deluding herself; that she finds Axlerod’s methods to be on the wrong spectrum, but bites her tongue, and convinces herself he’s playing by the same rules as everyone else.

But then she sits down on that couch, next to the prone, comfortable, unafraid Bobby Axlerod, and tells him to his face—I did this for you, because I believe in you—, and all illusions of delusion, or ignorance, are wiped away. In this battle between her husband and her boss, she’s already chosen a side, before a single shot was fired.

Billions second episode was a table-setter; it was a better pilot than the episode that preceded it. Now we’re in the meat of things, with Axlerod and Rhoades arming themselves for the eventual clash. Now Axlerod has a mole in the office, reporting back to his fixer Hall. She hasn’t really been all that useful, not yet. She reported on Birch being offered a plea deal, but they would’ve found that out themselves very soon anyway.

But at this point it’s not her actual usefulness that matters, but more that their ability to get to Chuck Rhoades is unparalleled. Rhoades is well-respected, with a future in state and national politics; his office has batted a thousand in the cases it’s taken on. But he’s not match, for intel or power, when he’s up against Bobby Axlerod. Axlerod is rich, and a genius, and he has the adoration of a people that don’t normally adore those who can drop $100 million on a symphony hall. Axlerod already has a direct line into the Rhoades household through Wendy; if you don’t think that he’s watching her, always checking for a change in attitude, or temperament, or work quality, you are sadly mistaken. He believes in her skills, sure, and they are friends, definitely. She would always have a longer leash than anyone in the firm. But that leash is much longer because she’s a spy, even if she doesn’t know it.

This battle is so one-sided, it’s laughable. Chuck knows it, too. He ambushes a reporter at his own home, trying to force him into revealing his source. It’s stupid from the outset, from all sorts of angles. If Axlerod is having him followed, it’d take one snap to expose him to the press. If the reporter is a little bit angrier, he exposes Chuck. In no universe, whether we walk upside down or eat with our fingers, does Chuck Rhoades come away with from that talk with anything but a mark from where the reporter laid his hands. He’s already so desperate that he lets Steven Birch walk, just so he can get back to Axlerod. He’s narrowing his focus to this one case, so that he can bring down the whale; it’s a noble goal, for sure, but when you chase that whale, you forget about all the fish. There are plenty of people on the streets, taking money from people and hurting them, for Chuck to bring to justice. People mock his 81-0 record, but there are people who are afraid of his office. He may never have taken down the biggest game, but the biggest game don’t mean jack in a world where the smaller game are still stealing billions.

I think Billions is on the wrong network.

Showtime gives it the freedom to curse and show nudity; Great. Cool. But Billions indulges in the first one so much that it’s almost unwatchable. It doesn’t add to the narrative, or the characters. I’m also sure that it has some basis in reality; I remember reading that at some Wolf of Wall Street showings, the more debaucherous parts were cheered by the Wall Street guys watching. But it’s so over the top that it distracts from the story going on.

I think that if this were a show on CBS or ABC or whatever, it would fit in better. It has a lot of the trappings of a network show, and the presence of the FCC would tone down some of the more gratuitous (and frankly boring) parts of the show.

The Chuck Rhoades character has had the most shading done in the first two episodes; a lot of that is Giamatti, but a lot of it is the writing, too. They’ve painted him as a man with regrets, who tries to do his job for the right reasons, while also indulging his own career. He’s interesting, funny, and noble, and also an opportunist, and insensitive, and too enamored with his own power. The problem with this show is not Chuck Rhoades.

No, the problem lies with Bobby Axelrod. He has been painted as a jerk, with no redeeming qualities; all good deeds that he does are for his own benefit, to either burnish his own reputation or to exact petty revenge against those unfortunate enough to be in his way. His takedown of the Ellis family, for something that happened when he was a teenager, only serves to make him more of a cartoon. His problem is on the same level of Frank Underwood, but worse—you don’t believe that there is good in this man, and as such, he’s one dimensional.

That could all change, of course, but it would be a big reversal. They’ve spent a lot of time and dialogue (so much dialogue) on setting things up quickly. If they want Billions to be anything more than an average to occasionally good television drama, however, they need to make him more shaded, because this cartoon villain stuff isn’t going to cut it.

One last thing: the people in this show talk entirely too much. Too many speeches, and monologues. That’s gotta go, too.

Chuck Rhoades ramps up his pursuit of Bobby Axlerod, while Axlerod throws his weight around in a big way.