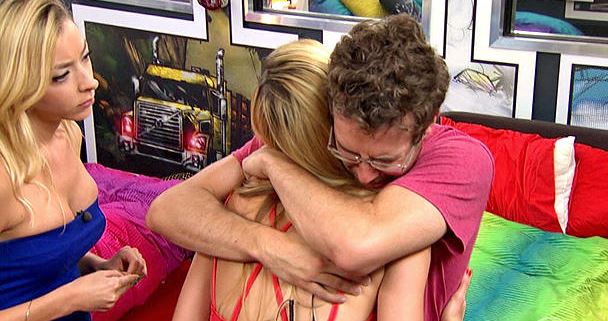 After a mess of a double eviction last week, Big Brother had a lot of explaining to do in tonight’s episode. While it’s still not entirely clear why Shelli was evicted over Vanessa or why Steve targeted who he did, at least this episode provided some illumination into who is on what side of the house. With the house literally divided, it was time for everyone to declare sides, even the floaters who have remained fairly quiet up until now.

First things first, we did get a look into Steve’s thought process on double eviction night. As suspected, it was Vanessa who told Steve that Jackie was going to backdoor him when she was HOH. This was the only time Steve had heard about someone coming after him (unsurprisingly because he’s done nothing to deem himself targetable), so in his mind, she was the one who needed to go. Afterwards, he struggled with the decision he made, clearly wishing that he would have gone after Becky instead, as that would have caused less waves.

While Steve was fretting about being the target this week, both sides were trying to woo him over to their side, knowing that he was the number they needed to get votes to go their way. James, Meg, and Becky are willing to let bygones be bygones and want to work with him along with Johnny Mac going forward. That would give them five people in their still unnamed alliance. On the other hand, the remains of the Sixth Sense, consisting of Liz, Julia, Austin, and Vanessa all want Steve on their side to give them that fifth vote. Despite the disastrous short-reigned HOH run he had, Steve is sitting in pretty good shape going forward, letting both sides believe he’s with them.

Even though Steve hasn’t officially picked a side yet, he has started playing the game as has Johnny Mac. For Johnny, though, things are looking less than stellar. With Liz taking the next HOH, it was fairly clear to everyone in the house that Vanessa would be heavily influencing the nominations. Becky tried to deal with this by planting seeds of doubt in the twin’s minds about Vanessa, who is only looking out for herself in this game. While it may have made them second guess completely trusting Vanessa, they still know that they need to work with her at this point.

On the other hand, Johnny Mac has made a big mistake in the game, angering Vanessa at a time when she does have some influence over the nominations. When she came to him, trying to clear the air about a miscommunication they had previously, he explained to her that she came across as a bully and that he didn’t like it when she yelled and cried at him. All very true statements but probably not the best thing to say to someone who’s on the side of the house with power. This pretty much cemented Johnny Mac’s allegiance with the other side of the house. It also gave Liz a very easy reason to put him on the block up against Becky. While Becky was originally going to be their main target after the shot she took at Vanessa last week, it’s now looking more like Johnny might be. He’s got some serious work to do if he wants to stay in the house. And while I love him for telling Vanessa how it is, it wasn’t a great move for his game.