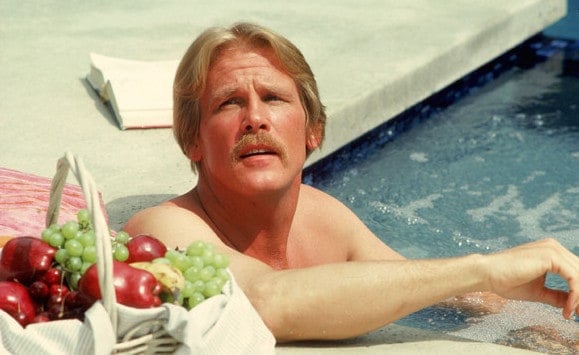 As great of an actor as Nick Nolte is the funny thing to learn is that beer seemed to be his weakness in the beginning. He was actually kicked off of his high school football team for hiding beer before practice and drinking it during practice. When he went on to college to play football, baseball, and basketball he did pretty well until poor grades forced him to drop out and take up acting. It’s enough to make you shake your head at the antics that some folks get up to in their youth, but it’s even more of a head-shaker to realize that eventually some of them became rather popular and even legendary in a way since they took up a calling that not only came naturally to them, but eventually made them rich and famous. It seems that if anyone had ever underestimated Nolte that they might have long since seen the error in their thinking.

Jack is a troubled man, there’s no denying that. After a murder investigation that goes awry he seems to come a bit unhinged as the story goes on. Between warring with his ex-wife, his father, and simply trying to get by as best as he can in a life that is becoming increasingly unstable, Jack finds that he’s just a miserable individual that keeps pushing everyone away. When he kills his father and burns his body to get rid of the evidence it seems to be the last straw as he then skips town, never to be seen again. As the narration of his brother Rolfe tells it, an unnamed vagrant might one day turn up frozen to death, and that would be final story of his brother.

Some would argue that football players are still allowed to get away with whatever they want, but Elliott takes it to a different level since his lifestyle is something that’s hard to tolerate and would get him kicked out of the league in this day and age. But during his time with the team he and the coach do their best to make certain that the game is played the way it needs to be in order to win, at least until Elliott is put under surveillance by the team and has his every move watched. Once it’s found out that he’s doing a few things that most people would frown upon it seems likely that his future on the team might be in jeopardy, so he ends up quitting for good.

3. Down and Out in Beverly Hills

It’s funny how the filthy rich tend to become dissatisfied with a life that’s spent living out their every fantasy, but when the couple in this movie are unceremoniously introduced to a run of the mill bum that tries to drown himself in their pool they find something else to focus on for a while and are therefore given a new perspective on life. It’s amazing how one thing in life can turn everything around in such a strange and unprecedented way. But as the couple continue to get to know the man they can’t help but change their views and outlook on life in a number of different ways, no matter how reluctant they are at first.

This is one of those classic drama comedies, or comedy dramas, whatever, that you can’t help but laugh at and realize just wouldn’t fly today since the cop would likely get fired and the convict, well, walking into a redneck bar in this day and age it might not be a pretty picture. But back in the day when this movie was popular it was a lot of fun and it was the kind of movie that still went a long way towards showing that a man was a man and knew how to handle their business. In a way this almost seems like it would be labeled for toxic masculinity since it does kind of promote stereotypes, but in one of the most fun ways.

1. The Prince of Tides

After such trauma as Tom and Savannah experienced it’s easy to believe that, left to fester, such a horror could destroy a person over time if they decided to focus on it over and over. While Tom is dissatisfied with his life Savannah is suicidal and needs a great deal of help. While Tom and Savannah’s psychiatrist do manage to help her they end up helping each other as well as they find a new way to turn their lives around for the better, becoming intimate and close and finding that each one of them is a balm for the other.

His career has been pretty impressive thus far and as he nears his 80s it’s easy to look back and admit that he’s had quite a few interesting movies.