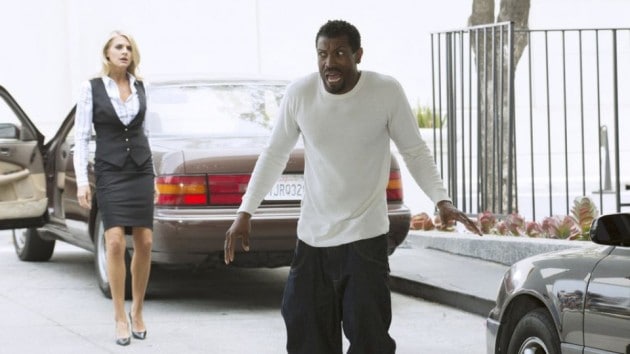 On the short list of Benched‘s early flaws, its struggle to make cases and clients matter to the show’s character has been the most glaring. In no way has it been a major downfall of the show, but there’s no doubting the missed potential in earlier episodes to flesh out clients instead of dangling them as obvious vehicles for resolution through the first two acts. Thankfully, “Diamond is a Girl’s Worst Friend” introduces Diamond Danfield (a wonderfully-cast Deon Cole, who’s been killing it in a recurring role on Black-ish) to the mix, a character who finally bridges the gap between setting and character in a meaningful way.

Diamond Danfield is a surprisingly well-constructed character used to examine the legal system Nina works in: when she gets him a “great deal” with parole and anger management classes, she finds out what it actually means to “help” a client. Words on a sheet of paper are one thing; once Nina steps into the real world and realizes what life is like for Diamond, she finds herself wanting to be a more compassionate lawyer (plus, she’s got ten bucks riding on it, pulled into another one of Phil’s bets). However, she doesn’t actually know what that entails: and in the end, Diamond and the others in his anger management group point out how selfish she’s been while purporting to “help” Diamond.

The interesting thing Benched doesn’t shy away from is how no matter how noble Nina acts, she can’t really help Diamond at all: he’s both a man who can’t help himself from staying out of trouble, and someone caught in a vicious, out-of-balance justice system. To be a good public defender, Nina’s got to find the right balance between professional courtesy and personal investment, in itself a reflection of her personal journey throughout the first season. And “Diamond is a Girl’s Best Friend” is able to channel these societal ideas (summed up nicely by “Please, Sandra Bowlock, teach me how to use a fork!”) and personal journeys and roll them up into a neat, hilariously poignant little ball.

On the other side of the public defender’s office, Carlos and Phil find themselves entwined in another series of gambling schemes, which provides a pathway to finally give some character to Micah, the office’s almost over-capable intern. She’s given some much-needed depth as the serious, slightly arrogant law student who looks down on the guys fooling around in the office, assuming their laissez-faire nature makes them less of a lawyer than she is. Except she forgets she isn’t a lawyer yet, and chokes in court when she has to deal with the human element of being a public defender; that is, understanding that the people on the legal documents are breathing creatures with lives and families of their own. That idea ties itself neatly to Nina’s story, and also gives the opportunity for Micah to establish her comedic voice within the ensemble, her arrogant dismissals of Carlos and Phil pairing nicely with her nervous laughing and inconveniently-phrased questions to the judge (“If the court pleases itself…”).

Though it comes at the cost of having Trent, Cheryl, and Judge Nelson around, “Diamond” is the first episode of Benched that really finds a balance between the professional and personal aspects of the show, even while separating Nina from the rest of the group for the bulk of the episode (on a related note: the show has to bring Diamond back at some point, right? He’s fantastic!) and focusing on a character whose mostly been a rough outline through the first season. By giving depth to a client and a minor character, Benched is able to deliver one of its most consistent episodes yet, a surprisingly rich half hour about the justice system, and a few of the lost souls stuck fighting in it (or in Micah’s case, experiencing the thankless world for the first time).