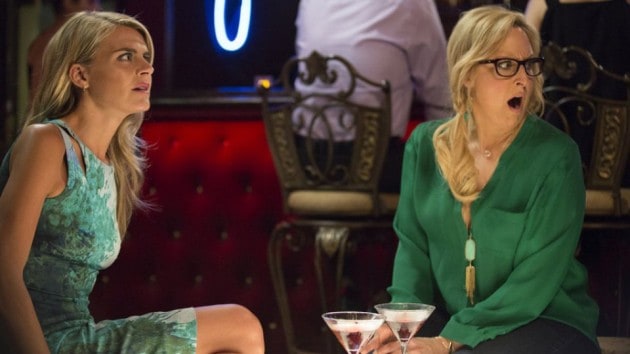 Although Nina and Phil’s blossoming friendship remains the centerpiece of Benched‘s first season, “Curry Favor” is another strong episode that highlights a different pair of friendships in order to deepen its main characters, a fantastic half hour that smartly side steps a lot of the easy genre cliches baked right into the episode’s premise. Add in a hilarious B-plot that prominently features Carlos (who is quickly becoming my favorite character on the show), and you’ve got a comedy hitting its stride – not only is “Curry Favor” a great standalone episode, it’s an important marker for the show’s confidence in itself as it passes the halfway mark of its first season.

Of the many impressive facets of “Curry Favor”, the highlight is found in the aforementioned relationship between Nina and Phil: after Nina decides the two should avoid personal conversation and be work friends (which leads to a classic Phil quote: “Man, Tuesdays… they’re like the Mondays of Tuesdays!”), the two of them spend the bulk of the episode addressing problems in their personal lives with the help of friends, to equally horrible effect. How the episode is able to separate them, yet still given quiet importance to their growing friendship is the kind of confident storytelling most comedies wouldn’t attempt to dig into: most shows would go heavy on the rom-com angle, full of misread communications and “almost” moments where the connection between the two couldn’t be any more obvious, except to one of the two people involved in it.

Nina and Phil, as reluctant as they would be to verbalize it, recognize that attraction to each other: as “Curry Favor” points out, the two both lead pretty lonely, often desperate lives in their pursuit for personal happiness. Nina attaches herself to the first woman she can relate to (who herself fudges evidence to make friends), and Phil gambles a lot of money in the hopes of buying a house boat (in turn bringing out Carlos’s desperation when he agrees to bet with him, then teach him a lesson); these aren’t people who have a solid grasp on their deep-seeded issues, and “Curry Favor” teases these out and draws parallels between all four of them (primarily Nina and Phil, of course) without being overt and explicit about it.

There aren’t many young comedies confident enough to deliver that kind of story without spelling it out to the audience; yet once Nina and Phil open up to each other again (which for Phil, means making fun of her accessories), the two are able to find resolution in their stories. Phil turns in Edie for Nina (in turn saving the one professional friendship with a female she’s made – we haven’t had the Nina/Carol hangout episode I’m patiently waiting for yet), and Carlos doesn’t bet their money on the horse (who turns out to win); although the two of them cause themselves more trouble by allowing other people to help them, the two rise above their respective conflicts through their shared connections. When Phil starts a “Nina sucks!” chant at the end of the episode, it’s the closest thing the show’s had to an endearing moment so far: it not only speaks to the quirky friendships the show’s established early on, but a new sense of emotional growth that wasn’t yet apparent in previous episodes.

Each week, Benched continues to raise the bar for itself: it could still use some work when it comes to integrating cases into the plot of the episode, but it’s filling out its secondary cast well (Boring Larry returns, furthering the theory that Carol and Larry are but one Carolarry creature) and delivering final acts capable of a little subtlety, something that’s always welcome in the world of characters who Explain Their Feelings when they hear the two-minute warning. With “Curry Favor”, Benched is really starting to tap into its potential – I can’t wait to see where this show goes in the last five episodes of its freshman season.