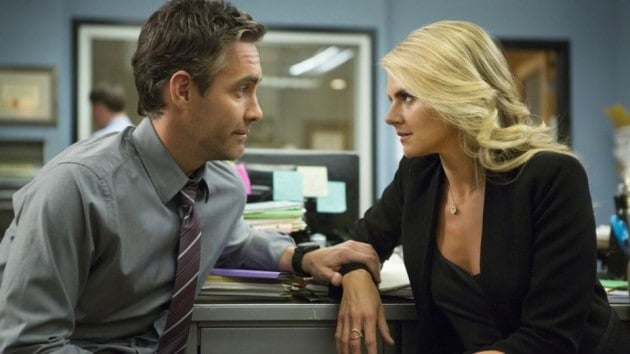 Ineffective shark metaphors aside, “Shark, Actually” is another solid entry for Benched, one that finally pushes Nina to the background – if only for a few scenes – to focus a little more on Phil and Carlos, continuing to build out the world of characters in the public defender’s office (and around it). Of course, all the great jokes and heartwarming small moments can’t outweigh the feeling the show’s forcing its two leads together; something that embodies itself right in the title, a play on Love, Actually.

Not that Phil and Nina wouldn’t make a great couple: I just think teasing an idea so early robs a show of potential character-building, instead constructing stories around why people are good for each other, rather than stories that exemplify why these people are just good people in general – and when Nina’s off learning that there is such a thing as a honest, nice defense lawyer (played by Mechad Brooks, who just doesn’t get enough work in television now that Necessary Roughness is gone), Benched is going a long way towards building those latter stories. Well, not so much in portraying Nina or Phil (who spends the episode trying to incorporate vocabulary words into anything he says in) as “good” people, but people that are entertaining in their pursuit to better themselves in whatever microscopic ways they can: when “Shark, Actually” is doing that, rather than teasing a Nina/Phil romance in predictable ways, it’s a markedly better episode.

And despite the absence of Maria Bamford, this week’s episode of Benched is the funniest yet, in part thanks to Oscar Nunez’s character Carlos, who has become the show’s beacon of mediocrity, an easy joke device that’s elevated thanks to Nunez’s ability to deliver punchlines and generally act energetic and aloof. He’s almost entertaining enough to cover up for the lack of ensemble in the episode, which focuses so extremely on Nina and Phil, that Carlos and Trent are the only other main characters to make an appearance (well, the paralegal who wears suits to court… but does she even count as a character?). Benched is still building its world, sure, but halfway through its first season (and quite possibly only; USA hasn’t renewed Playing House yet, which begs whether they’re questioning their venture into original comedy), it would be nice if Benched had a better set of revolving door characters to choose from in each episode. After spending two weeks developing Boring Larry, we don’t even see him in the episode – that lack of focus on ancillary characters isn’t one we’ll notice now while getting to know our protagonist and her immediate circle of people, but one that could potentially grow into a major problem in later episodes and seasons.

That’s not to say Benched suffers from tunnel vision writing: quite the opposite, in fact. The writers of Benched have such a large comedic palette to work with, it’s surprising they haven’t been able to translate that into a developed cast of minor characters in the manner that say, Scrubs or Community was able to do in just a few episodes (I’d argue Scrubs developed an ensemble better and faster than any show in TV history, but there’s certainly a debate to be had there). However, “Shark, Actually” (again, despite its misplaced, often ignored central metaphor) is another promising step in the right direction, one that continues to develop Phil and gives Eliza Couple plenty of comedic material to chew up – and being the most important relationship of the show, I think it’s a good sign for the show moving into the back half of its freshman season.