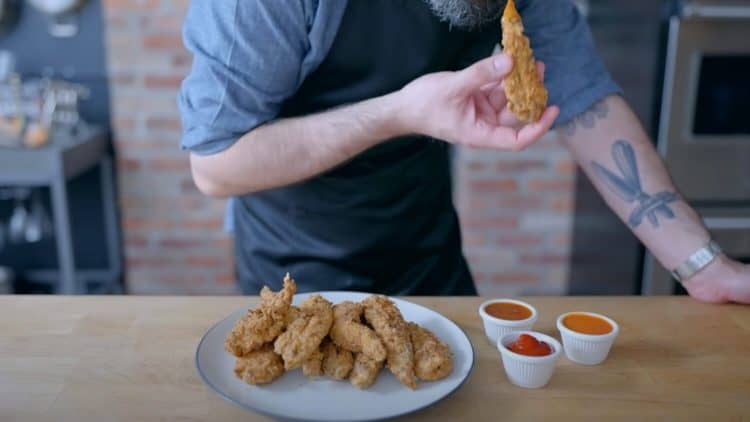 Obviously some folks think more about their chicken tenders than others do since getting into the different seasonings that can be used, the double-dipping in the egg whites and the flour, and then using different methods to cook them, can make a huge difference. Some people would say that a chicken tender is a chicken tender and there’s no need to give it any thought, but those of us that actually enjoy chicken tenders might beg to differ and listen closely to what Babish is talking about since that crispy skin and moist, tender chicken is what is really desired and what people tend to drool over when they think about a chicken tender. Yes, it’s weird, but it’s so much better than having a soggy or uninspired hunk of chicken that’s been breaded and tastes like a meat sponge. The seasonings are a big part of what makes the chicken tender so popular since chicken is something that can take on the flavor of just about anything. The brining was an interesting touch since I have to admit that’s the first time I’ve ever heard about sticking a chicken tender in brine to give it more flavor. But all one has to do is look around and listen and watch to find new things that they haven’t heard before, which is part of why Babish is so much fun to watch since he’s bound to come up with something that a lot of people might not know much about, but are happy to learn.

How much thought do we really give to chicken tenders? Some folks might even still wonder about what part of the chicken the tenders come from when in reality it’s kind of simple when you really think about it. The tenders come from the pectoralis region of the chicken, the breast in other words, as after being deboned and cut into strips, one has tenders or chicken fingers. Anyone thinking that chickens might have big fingers that people don’t know about…yeah, there’s not a lot of hope for those folks. Anyway, chicken tenders are without any doubt among the best part of the animal to eat since they tend to be the meatiest and easiest to cook since there’s so much that can be done with them. Some chefs don’t think much about tenders and might actually try to do something innovative and reform the tender in some way simply because making chicken fingers is too simple and perhaps too droll for their taste. But to be perfectly honest, chicken fingers are comfort food in a big way since they are that simple and there’s a lot that can be done with them, as they can be seasoned, breaded, and then fried up, and they can even be served with cheese and various other additions if a person is feeling daring. Chicken is such a versatile meat that there’s not a lot that can’t be done with it, within reason of course.

In relation to other meats, it can also be one of the cheapest to buy in bulk as well, since there are likely a few of us out there whose mothers made chicken every other meal, or so it feels. The idea that chicken can be used in so many different ways is very real since if anyone takes up a cookbook and flips to the poultry section they’ll likely find a huge section on the different ways to cook chicken. To be real though since chicken tenders are a comfort food it’s not surprising that a lot of community colleges might think about adding them to the menu unless said colleges are going for a much different and more elegant approach to help stimulate their culinary students and offer them a host of different challenges. It’s amusing really to think of how many different ways colleges try to serve their students and to keep their culinary department on its toes, but chicken tenders aren’t one of them since a lot of people might actually turn up their nose at being asked to make a plate of chicken tenders, perhaps thinking it as beneath them since there are some culinary programs that might breeze through some of the simpler meals and move quickly into fine dining and other cuisines that are meant to elevate the skills of their students. But then again what do I know, I’m an author, not a chef, but I do know that disposing of the peanut oil after frying with it can be troubling if one doesn’t know how to do it.

Just tossing it out isn’t a good idea, and putting it down your sink isn’t acceptable either. Instead, put fryer oil into a sealable container and figure out if there’s a location nearby that can dispose of it, or toss it in the trash. The former option is usually better to stick with though.