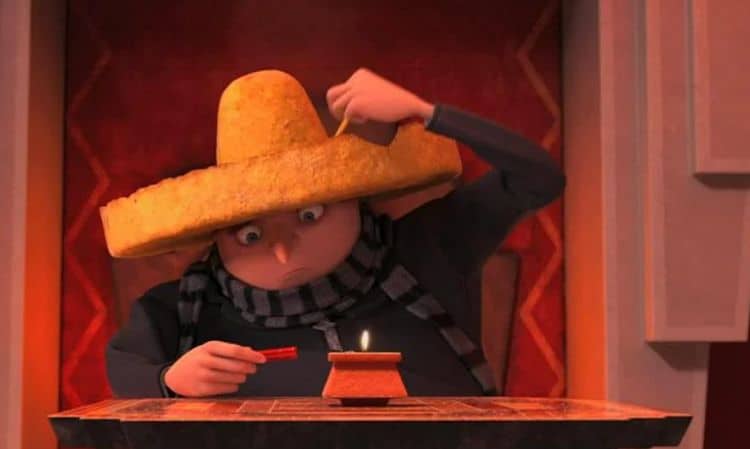 Who says you can’t play with your food? Certainly not Babish, who’s always welcome on this site since he brings so much fun to any topic that he’s covering. And by the way, we hope everyone is having a great Cinco de Mayo and staying as safe as possible on this beautiful day. But getting down to business this looks like such a fun idea but it also looks like something that would be best performed by someone, like Babish, who is fully aware of what he’s doing and knows the measurements and techniques to make this work. The tortilla sombrero from Despicable Me 2 is likely one of the best things ever seen in the movies and it’s something that a lot of people would no doubt want to try. But there is a good reason why the size would matter in this case since not only would the hat have to be a bit smaller for the sake of keeping it in one piece, but just imagine trying to sit there and enjoy this thing while others were breaking pieces off and seeking to enjoy it as well. That might be kind of awkward, not to mention a bit oily when wearing the thing. Those without hair would no doubt have a nice, shiny dome for a little while after sporting this edible accessory, but if the meal was as good as it sounds then maybe it would be worth it. In any case, making this at home would be kind of a tough process it looks like since mixing it and getting the dough ready would be easy enough, but forming it and making sure that it’s not so brittle that it would fall apart might be a challenge.

Trying to make something as big as the hat that’s seen on Despicable Me 2 feels as though it would require the chip to be unbearably thick and therefore harder than hell to break off, let alone chew. But obviously this is something that can be done in movies since the whole idea is that the rules of physics don’t always apply. This kind of give itself over to the idea of making things that are inherently impressive since they look as though they would be a lot of fun but also hard to really create in real life. There are a few other issues with the hat that would make it less of a great headpiece and more of a quirky but effective appetizer, since leaving it on the table would eliminate the need to wonder just how much chip is left before the dip starts to fall from the tray portion of the hat. It’s definitely cool, but extremely impractical when being used the way it is. I know, normally I don’t like to worry too much about the technical details of anything, but seeing as how Babish is able to come up with some truly interesting ideas it’s easy to look at them and wonder if this is really feasible or if it’s something that might be more of a nice gag than a practical idea. He did prove that the idea can work, but it also feels as though the whole idea of creating a stable piece that’s bound to stay together but be completely capable of breaking off in pieces would be kind of tough, especially if there are several weak points in the chip that might cause it to fragment and shatter. That would be one heck of a mess without any doubt, and one that a lot of patrons wouldn’t appreciate.

This is something that restaurants do try every now and then, however, since creating a gimmick can go a long way to getting people to talk about the restaurant, especially if the gimmick is fun and if it works as it’s supposed to. Creating something that might get a customer a discount or free meal would be something that a lot of places would do if they’re popular enough, and it’s usually a good idea depending on the place since it can be one of the reasons people know the place, and it can also be something that locals and tourists alike enjoy. But some gimmicks just aren’t that great, as they might be a tad too over the top or possibly kind of goofy and not at all indicative of the restaurant’s main theme. A chip sombrero with dip in the rim is one of those ideas that might sound cool and be appreciated by diners, but it’s also something that would be more or less for celebrations since it would be expensive no doubt and it would take more than a couple of people to finish. That’s a lot of guacamole after all. But like always it’s fun to see what Babish is up to since he never disappoints. Have a good Cinco de Mayo everyone.