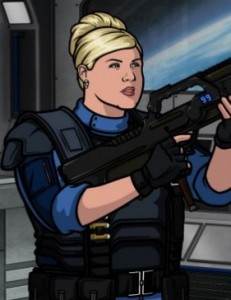 Archer blasts off with its finale from season 3, or technically season 3.5 “Space Race, Part 2,” as Archer and the ISIS crew fight their way through space (with guest star Bryan Cranston) to escape a mutiny on an international space station. While thoroughly entertaining and full of great moments throughout, sadly the season finale isn’t one of the most memorable Archer stories of the series.

Well, I have to admit. I never thought I’d see it coming, but for once I’m actually sad to see Archer go. I never made terribly much of the show before I caught myself up in time for the current season, and in truth it’s still not my favorite show, but I have found myself laughing more and more. Perhaps it takes that time to have Archer grow on you, or that time to allow jokes and references to simmer long enough that they’re funny again within a few episodes, or even months. Least of all, I hate when cartoons leave people on cliffhanger-esque notes, given that there’s much less in between seasons to gossip over and exploit on the internet. The episode wasn’t exactly a cliffhanger (I had expected the shuttle’s crash to be the closing moments, not the aftermath), but there are much better things to be left in suspense over than Ray’s legs or whether Cheryl lost an eye.

To be honest, I had looked toward Archer‘s last four episodes as something of a continued story, the way “Crossing Over‘bled into ‘Skin Game,’and how ‘Space Race, Part 2’would presumably pick up at least one or two threads ignored to get Archer and co. into space the first time around. I wasn’t entirely wrong, as Barry thankfully showed up in the last act of the finale to goad Archer into finishing their fight, and indeed finishing up the story for viewers, but I’ll accept the meta-conclusion that some stories are best left waiting for another day. I don’t blame Archer for tabling one of its better recurring plots, I just wish the season itself had been structured a little better than to take us on an adventure of this magnitude for a finale, when the material itself adds next to nothing to Archer canon

In fact, it was nice to see the reappearance of Barry, however brief, parlayed into a lesson on Archer’s own ego getting in the way, continuing that very subtle delivery system Archer employs to dole out character development. I wouldn’t go as far as to say that I and other viewers still wouldn’t’have enjoyed cyborg Barry taking on Archer in a power-loader suit, but it was better than nothing to see Archer gain some humility. Even if it fell right back into narcissism that crashed Cyril’s return approach. 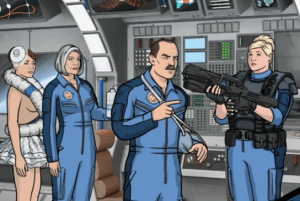 Of course people don’t come to Archer looking for heartfelt character development, and that’s why I still give a great deal of credit to the ‘Space Race’arc for being consistently funny throughout. I’ve been trying to think more about what comedies actually make me laugh (particularly watching odd episodes of The Big Bang Theory) and along with Community, Archer ranks among the few to keep me in a reasonable balance of smiles and chuckles. Most of it seems inherently sillier than some of the genuine tension presented by the first installment of ‘Space Race,’as we never gain any real ground on Commander Drake (Bryan Cranston)’s plot to terraform and colonize Mars, and no real great battle turns the tables for either side.

Instead, the latest Archer feels pretty…well, Archer, in that plot takes something of a backseat to sight gags of Lana naked, the vanity of one character or another compromising plans, or seemingly clairvoyant joke reprisals. I did enjoy the subtle Star Wars references, and the running gags of slavery jokes, and even Archer’s long tirade about Animal Farm, but the distinctness of those three items alone should clue you into the episode’s focus as a whole.

Again, I liked ‘Space Race’very much, but cant help feeling let down about the way things played out. ISIS trained for a deadly mission in space, but it was a ruse. Commander Drake had a sinister plan to populate Mars, but it never got off the ground. Barry blasted his way through space to take on Archer, but they postponed their duel. When I think about every narrative moving through the past few episodes, there simply wasn’t a whole lot of closure to ‘Space Race, Part 2’as a finale, hilarious though it may have been. And that’s why after doing my best to think critically about an entire season, I might swing back to my initial assessment of Archer. There’s plenty to laugh at, but only so much to invest in.