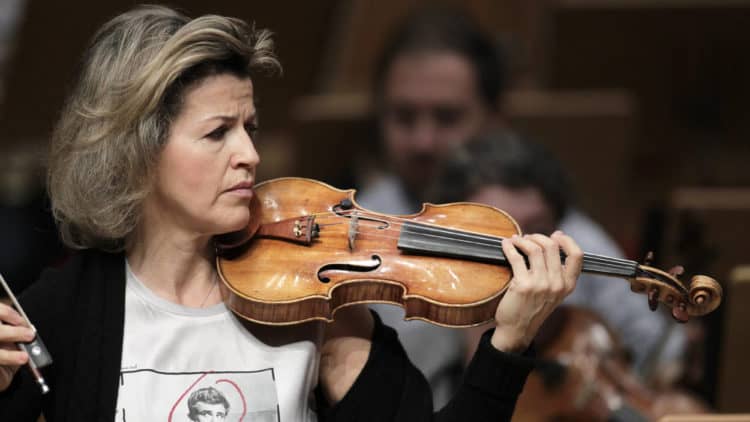 Playing violin is an art that many people are yet to master yet admire from afar. It takes passion and continuous training to become good at it. That said, a few people have excelled in the art of playing the violin, and Anne-Sophie Mutter is among them. She is a prominent violinist who has been to several parts of the world to showcase her prowess. Mutter is determined to leave a mark in the music industry as a great violinist, but it was not an easy journey. We are humans, and we sometimes lose focus; she nearly gave up playing the instrument in two different occasions. The thought of giving up did not last long as she later realized that she still had to leave a legacy by doing more than what she had already accomplished. Get to know more about this great violinist by checking these facts about her.

1. She started playing the piano when she was young

Although we know her as a great violinist, Anne-Sophie began by playing the piano according to Famous Birthdays. She stumbled on the keyboard and enjoyed playing it. Mutter later decided to switch from piano to a violin and at some point, left school to concentrate on the art. As a violinist, she did even better, and the world recognizes her today through her music.

2. She discovered her passion in playing the violin at 5

Mutter realized that playing the violin was her thing when she was five. The instrument was a present that her parents gifted each other to celebrate their engagement. Mutter had the power of persuasion when still young hence, she convinced her parents to get her a violin of her own. Her persuasive power worked, and she got the violin and started practicing.

3. She was not satisfied with her performance as a teenager

Although we know her as a great violinist now, her journey to being competent was not without hiccups. Mutter was not pleased with her performance as a teenager. She performed for the first time at 11 years old and later decided to put the art aside at 20. Surprisingly, Mutter then started playing again, and this time loved playing the instrument more. She says that she now has to erase some of the memories like those of leaving aside her violin. To her, art is always work in progress.

4. She hates it when people record her performance

When an artist is on stage, most fans love immortalizing the show by recording it. For Mutter, the story is different. While performing, one fan started recording the performance on her phone, and it bothered Annie. She decided to give the fan a stern look, and the fan kept her phone away. She later said that her performance was entirely original, and fans should not copy the art without her consent. She says that people should not replicate whatever she does, thus recording her on stage is a violation of her rights. She said that it might take years to come up with such art, yet people take it for granted.

5. She loves reading a lot

When Mutter is not playing the violin, then the chances are high that you will find her reading. Her love for books started when she was still young. Sartre is the first author Mutter fell in love with at a younger age. She loves German and Russian writers, but Thomas Mann remains her favorite to date. She loved stories on women who lived passionate lives and made significant impacts on society. Mutter says that the success stories of women have been meaningful to her life, especially since she is a working mother.

6. She once wanted to retire

When Mutter was 45, she announced her plans of retiring as a violinist. She later changed her intention of retiring after one month and said that she still owes the industry a lot. Mutter said in Classic FM that people misinterpreted her, and she would remain in the industry to continue bringing new things. She felt that staying in the sector could be an excellent chance for her to bring something valuable and unique to the music industry.

7. She loves men who are intelligent, witty and open-minded

For Mutter, an ideal man is one who is smart, funny, and open-minded. She has experience with men starting from her paternal grandfather, who died in World War II. Mutter never met him but heard from people who know him that he was a great piano player. She later interacted with her father and two brothers, and all were amazing to her. Mutter says that dogmatic people are unattractive and disturbing to her.

8. She has been in two marriages

Mutter has been married twice. In 1989, Mutter married Detlef Wunderlich, who was thirty years older than her. She says that Detlef was her perfect match, and nothing could stop her from marrying him. Together, they had two children, Richard and Arabella. Sadly, Mutter lost her husband in 1995 when he succumbed to cancer. During the death of her husband, their children were below three years of age, and she found it very hard. Mutter later realized that other people are in worse situations, and the pain vanished. She later married a composer and a pianist in 2002, but things did not work out for them.

9. After their divorce, her ex-husband remained supportive

A divorce happens mainly after disagreements, and the affected couples might not want anything to do with each other. For Mutter, the case was different. After breaking up with her composer and pianist ex-husband, they continued working together as musicians. They collaborated to ensure the success of each other hence described him as a very supportive man.

10. She has her foundation to nurture and mentor young musicians

Mutter loves both musical and visual art and has taken the initiative to ensure that art stays alive. She has her foundation to nurture young musicians. Her foundation also raises money to assist orphans, people with disabilities, and the elderly.