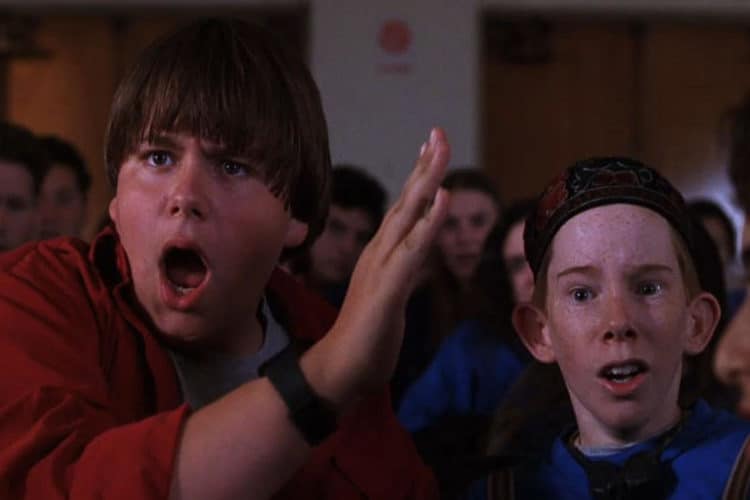 It’s not that big of a deal if people don’t recall the coming of age story titled Angus, as it came out back in 1995 and it wasn’t the biggest hit. But it was relevant then and it’s still relevant today for a couple of reasons, one of those being that it had a lot to do with being comfortable with one’s body and place in the social hierarchy of one of the toughest places to exist, high school. Granted, not everyone feels as though high school is an emotional battleground, but every person that’s ever graced the halls of education has found at least a bit of difficulty here and there. On top of being saddled with the name of Angus Bethune, the young man that is the focus of this movie is also much bigger and is, well, stocky and big-boned. In less polite terms, he’s fat, and he does stand out in a crowd. But what Angus has going for him is that he’s a highly intelligent individual that is hoping to transfer out of his school and into a place of higher education that will be far better for him. But then again, it does mean that he’s running from his problems, not facing them.

That’s one reason why this movie is so relevant at this time, as the social image that many people struggle with today, in numerous ways, correlates with this movie in a way that is easy to point out to anyone. Angus and his friend Troy, who’s smaller than most of the high schoolers, has big ears that stick out, and basically looks like someone that would be picked on mercilessly for a few reasons, have been good friends since grade school at this point, and even though their friendship is a bit strange, they’re still seen as being quite close.

When Angus’s arch-rival, Rick Sandford, decides to pull a prank on Angus by getting him elected as prom king, the ridicule that Angus has already been dealing with for years only intensifies as he has to figure out how to dance, what kind of tuxedo he’s going to wear, and worst of all, he has to accept himself for who he is. His grandfather, played by the late George C. Scott, is a bit cantankerous, but also supportive of Angus in his own way as he seeks to teach his grandson that ‘Superman isn’t brave’. Seriously, it’s one of the best lines in the movie, since it finally ends up inspiring Angus to take his grandfather’s other bit of advice ‘screw ’em’ to heart as he finally ends up heading to the prom to stand with his dream girl, Melissa Lefevre. Even better than this, when Rick is deposed as being a jerk and tries to fade into the background again, Melissa takes his hand and, in a great moment says ‘screw ’em Angus’ as they go to dance as prom king and queen. If you’re following this far, then it’s easy to see how this is a triumphant moment that a lot of people can take heart from since it means that he’s finally learned how to accept that someone sees something in him that others don’t.

Thinking about it now it’s fair to say that there are so many teen movies that were coming out during the 90s that it was easy to think that Angus would get overlooked and essentially forgotten once the 2000s rolled onward. But the relevance of this movie is important for pretty much any era since as a high school movie it’s the type of story that many people can likely find inspiring and even relate to in one way or another. Many people have been the outcast at one point or another in high school, it’s a rite of passage for some folks that many don’t want to admit to, and it’s something that’s going to continue to happen since like it or not, kids are jerks at various points in their lives whether they’re taught to be respectful of people or not. It’s a part of high school that’s going to happen, since bullying is a natural part of growing up, unfortunately.

But the message in this movie is great since while it does show Angus’s life as a series of moments in which he has to accept that he’s a bit of a reject in the eyes of his peers, it also shows that he ends up standing up for himself and realizing that as tough as it might be, he can turn his life around. The cast in this movie is great, the dialogue is snappy and enjoyable, and when all is said and done, this movie is something that can be used as a positive message in pretty much any era.