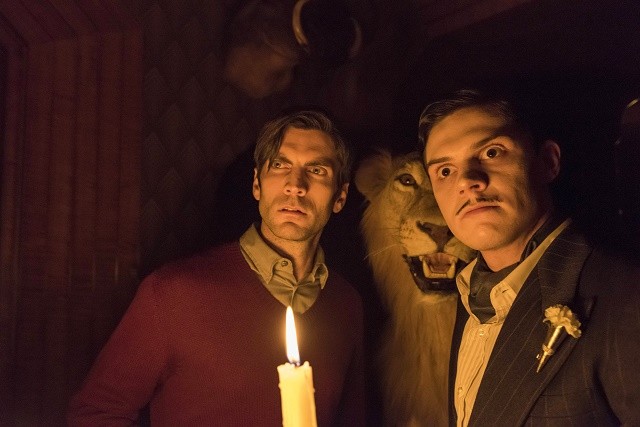 We’ve been getting a huge amount of backstory lately on American Horror Story: Hotel, and the show universe mythology has become much richer for it. Let’s take a look at what happened in this week’s episode, “The Ten Commandments Killer.”

The episode opens with John having just witnessed the child’s death from the previous episode after she ran into oncoming traffic on purposes. He finally remembers that she was one of the children from the Hotel Cortez, and he immediately races back to the hotel to confront Liz about the Ten Commandments Killer living in the hotel. Liz isn’t useful to him, but does offer John a gun as Sally decides to take him to the killer in room 64 (which, coincidentally, was the former office of James March). Sally directs him to a hidden door in the room, which reveals a “trophy collection,” of sorts, from the killer’s victims. As we’ve been led to believe since just about the beginning of the season, John discovers that he is the successor to James March’s crimes as the Ten Commandments Killer. As much as I like the dramatic impact that this revelation should have on the story, I do think the actual reveal was drawn out way too long. Most viewers solved this mystery quite a few episodes ago, and I think that the impact may have been lessened because of this.

After the title sequence, we see an extended flashback to 2010 as John has now become fully aware of who he is and what he’s done. In the past, we understand that the detective first entered the Hotel Cortez five years earlier and met with the Countess and the spirit of March as they enjoyed their dinner. John had just investigated an extremely tragic crime scene, and March tells him of rage and death, explaining that death is really the only thing that has meaning. They talk throughout the night, and March realizes that John is the one true successor to his legacy. March recruits his wife to give him the “push” that will send him over the edge as the memory of the evening is blocked from his mind. The next day turns out to be the day that Elizabeth took his son with her to the hotel, and he begins living two different lives: one as devoted husband and grieving father, another as friend to James Patrick March and Ten Commandments Killer. Despite the fact that the reveal of the killer’s identity was drawn out for too long, the actual backstory that goes into it turns out to be incredibly interesting. So much so that it really does make up for the fact that the writers tried keeping us in the dark for so long. John Lowe, through an unfortunate amount of this season, has really been a flat character that was only given a shred of intrigue because of the performance Wes Bentley has given, and the backstory that’s added to his character in “The Ten Commandments Killer” does more for his legacy than all of his time in the first seven episodes combined.

There isn’t a ton to talk about with “The Ten Commandments Killer” aside from recap because the episode was the most focused of the season, dealing solely with John’s recollection of the things he’s gone through because of the Hotel Cortez. With that said, it managed to still be one of the best episodes of the season, largely because of that focus. This is a show that has an absolutely outstanding ensemble cast, but Hotel has allowed itself to use the characters for the right amount of time without forcing itself to overload the audience (as Freak Show did for an entire season). The writing for the episode was also some of the best Hotel has offered so far, finally giving some real character to John. We also got yet another perfect performance from Evan Peters as March, and it will be an absolute crime if he doesn’t get some love during awards season.

What did you think about “The Ten Commandments Killer?” How do you think the remaining episodes of American Horror Story: Hotel will shape up? Let us know your thoughts in the comments down below!