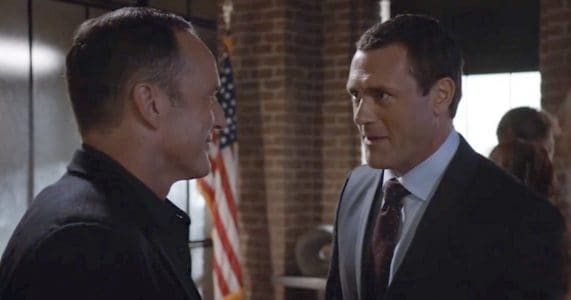 Agents of SHIELD got off to a really strong start in its fourth season premiere last week. Between the conflict of the main characters being so distant with one another and the introduction of Ghost Rider, there are some good stories left ahead for this show. While things have definitely evolved from Agents of SHIELD’s original premise, the show really displays the evolution of the MCU from a ground level point of view. The introduction of Ghost Rider and a new supernatural element with Doctor Strange about a month away from hitting theaters, the MCU is really beginning to feel like a nice representation of the comic book universe where anything is possible. Yet, what really elevates Agents of SHIELD to the next level through it’s first two episodes of the season is the current state of character relationships under new leadership and infrastructure, which is a lot of what ,”Meet the Boss,” highlights.

One of the things highlighted in this episode was really how distant the main characters have become with one another. May continues to struggle by her ghostly infection and rather than going to one of the main characters for help, she bottles it up. This isn’t a surprise from Agent May, but it is concerning that it continues to progress and she hasn’t at least sought out help from those viewers believed were closest to her. Fitz is stuck spending less and less time with Simmons while also working on projects he struggles to take interest in and looks for any opening he can find to get out of the house for a little bit. In last night’s episode, a big moment was when Mack and Fitz cross paths with Daisy, which is the first interaction any previous characters have had with her this season. It’s clear things are uncomfortable, but Fitz really lashes out about how he feels, clearly still very hurt, and towards Daisy’s way of handling things. While it’s a great impactful scene, it’s sad to realize the current state of their relationship with one another.

Each character is dealing with things in their own way though; everyone is trying to handle the new Director and how SHIELD operates under him, which is really interesting. “Meet the New Boss,” focuses heavily on the new Director of SHIELD (played by Jason O’Mara) and who his character actually is. Jeffrey, which is the only portion of name we are provided for the Director, seems like a traditional business man who is good at being the face of a company or organization. While there is still plenty to learn about his character, O’Mara was enjoyable in the role last night and made a really nice entrance. By the end of the episode, things get even more interesting because it’s revealed that Jeffrey is an Inhuman with super strength, and that Coulson stepped down willingly, even advising that his replacement be a well liked and known powered person. The dynamic with Coulson and the new Director is a really interesting one, because while there is a mutual respect there; however, each character operates differently, and I’m sure with Coulson being the previous director he might feel the need to comment on how things run, especially with the handling of Ghost Rider and other supernatural elements.

Ghost Rider is still a wildcard himself, but the character was a really exciting addition that seems to be fitting in perfectly through the first two episodes. His interaction with Daisy has been pretty fun so far, but it’s actually a nice way to develop their relationship because it shows they can both survive on their own. Daisy is trying to work with Robbie to take our their mutual enemy, but it’s clear that she’s fascinated by the Ghost Rider and the fact that he’s not Inhuman. The most interesting idea that will inevitably be explored in the coming episodes is how she handles his vigilantism. While Robbie always explains killing people isn’t his choice, will Daisy be able to constantly work with someone who kills? Regardless, the two have a really good dynamic being set up so far and it’s nice that Ghost Rider is being given so much depth already.

Agents of SHIELD has always had its flaws, but the show has really nailed down its tone over the past couple of seasons and is slowly refining it. Season 4 has started off extremely strong throughout the first two episodes and is doing a great job with its world building. The introduction of this new supernatural side to the MCU is a cool element that seems to fit perfectly. Ghost Rider has been a cool character addition that provides the lesser known heroes that fans want to see, but also has plenty of depth to bring to the table. Agents of SHIELD has developed characters and relationships that people care about, and so far, the show is exploring new situations with those relationships and incorporating additional unique situations and aspects that has this season looking very solid.