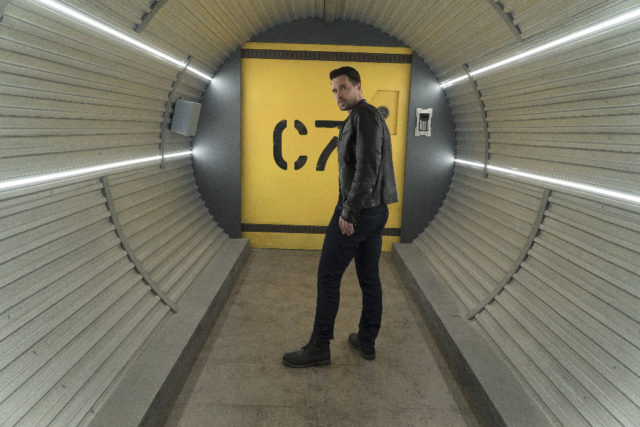 Some things are different, but all of the major characters on Agents of SHIELD still are who they are. Inside the framework, wondering if things would be different if May had never stopped the young Inhuman threat, our heroes true colors still shone through. While it’s nice to live in this world, I can’t help but long for the world of old. Although, admittedly, I’m just happy to be back on the SHIELD beat.

This week on Agents of SHIELD: “Skye” and Simmons are able to reach Coulson, so Ward connects them with S.H.I.E.L.D., still directed by Mace. Mack and his “daughter” are captured by Hydra, but they are used to out Daisy as a mole. Fitz and Aida work to hunt down Simmons. Ward, Coulson, and Simmons find Radcliffe to try and get out of the framework, but Fitz and Aida are hot on their trail.

The most incredible thing to me about all of this is how emotional this story is. I would think that an alternate reality would bring a sense of detachment to the occurrences within it, but since so many of the characters have their minds uploaded into the framework, the stakes are just as high. I didn’t anticipate just how emotional or tense the storytelling would be, but “Identity and Change” made me as emotional as I’ve been watching Agents of SHIELD in some time.

Particularly, the regret was extremely strong with Radcliffe, which was sobering. Of course, the most emotional moment for him was easily reminding Fitz what his life was like in the other world. Unfortunately, that was followed by Fitz’s darkest moment ever…when he shot Agnes dead. Radcliffe and Simmons had their hearts broken simultaneously, and it was an extraordinarily compelling turn of events. It was emotional, intense, and came pretty close to bringing a tear to my eye.

The reason that I mentioned at the beginning of this article that the characters have stayed true to themselves is due to a couple of interesting observations. For one, there’s May. She’s always been an orders hound. She tries to disconnect herself from the missions and the work, which is why she so easily turned on Daisy. Coulson is another who stayed true to his character. He was a nerd in awe of both the SSR and the Avengers in the “real world”, and that nerdy side shone through in his alternate personality. Then, of course, good old Mack. In the real world or the framework, Mack has a conscience. He’s a good man, which outweighed any show of force from Hydra.

This is only their second week back, and Agents of SHIELD is ripping out my heart and stomping on it. Just kidding. But seriously, this was an emotional, intense, riveting hour of television. I have nothing bad to say.