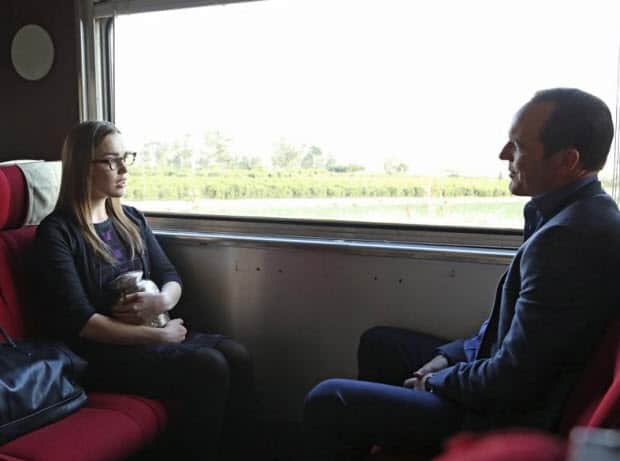 While there is still room for improvement, Agents of SHIELD has grown a lot more despite the fact that it has only aired three new episodes in 2014 since they came back from the winter hiatus.

Something that a lot of people were commenting on in the first half of the season was that the team didn’t seem to click or work well together. But ever since they came back, the team has finally reached the point where you can believe in them as a group.

Despite that the pacing has been mixed when it comes to character development, “T.R.A.C.K.S.” was an episode that featured good examples of how much these agents have grown. It’s especially fascinating to follow the development of the younger cast members since this show is basically their biggest gig that they have had so far. Fitz and Simmons have really evolved a lot since their first couple of episodes when they were mostly seen as fast-talking scientists with nerdy personalities.

It’s truly a blast to see Iain De Caestecker’s character in a more mature and serious perspective while still keeping the adorable geeky side of him in a balanced capacity. His dynamic with Skye was priceless from them trying to do accents to them bickering about their cover story as a couple.

Another great highlight was Coulson’s and Simmons’s cover as father and daughter. This is easily now one of the favorite moments of the show because Elizabeth Henstridge was just spectacular throughout the whole thing. During that scene, we also got to see the master of cameos and the Marvel man himself, Stan Lee. Just like his other cameos in the Marvel movies, his cameo here was fantastic and classic Stan Lee.

A few weeks ago, it was announced by Marvel that Deathlok was coming to the series and it wasn’t a surprise when they revealed the detail that Mike Peterson was going to become that character. We got to see the first glimpses of the Deathlok persona and the Cybertek leg that he got was incredibly impressive looking. This is just one of the first pieces that are going to help make the show feel more Marvel-y.

The search for the Clairvoyant is definitely going to be connected with this and it’s going to be exciting to see the further creation of Deathlok. The decision to turn Mike Peterson into Deathlok is so far one of the best decisions that this show has made and the more we can get with J. August Richards, the better.

Skye was a big player this week and just like Agent Ward pointed out, she is a lot more focused and motivated now, even though he doesn’t know the real reason for that. When the trailer for this episode teased that someone was going to get seriously injured, Skye was definitely one that a lot of us went to first. It was incredibly brutal to see her struggling to stay alive after Ian Quinn shot her twice. Thankfully, they did capture Quinn and it will be interesting to see what will happen to him on The Bus when the show returns.

When we were seeing the team being devastated about Skye, it was one of the most emotionally charged scenes that we have seen in the group so far. While it was a tragic moment, it was still positive in a way because it showed how much closer these people have become and that is what we want to see in a show like this. Skye’s fate is now uncertain, but could it be possible that her unknown powers will perhaps save her? We still don’t know what she actually is, but it could possibly be the thing that actually saves her.

The writing for this episode was phenomenal and it continues the ongoing change the show is going through right now which is getting grittier and more balanced. The acting was spot-on and it did a great job with putting these characters through serious danger. The way they did the storytelling was enjoyable and new for the show which was going back and showing what happened to them on the train individually.

Despite that we have to wait until March for new episodes, “T.R.A.C.K.S.” ended in a perfect way that left a lot of us viewers eager to see more, while also being partly frustrated that it has to go on a break again.

But at the same time, it’s good that it’s on a break now because you really don’t want to go up against the Olympics. Hopefully when the show returns in March, we won’t have as many hiatuses, if not any, for the remaining episodes of season one.

Marvel’s Agents of S.H.I.E.L.D. will return with new episodes, starting on Tuesday March 4, 8/7c on ABC.