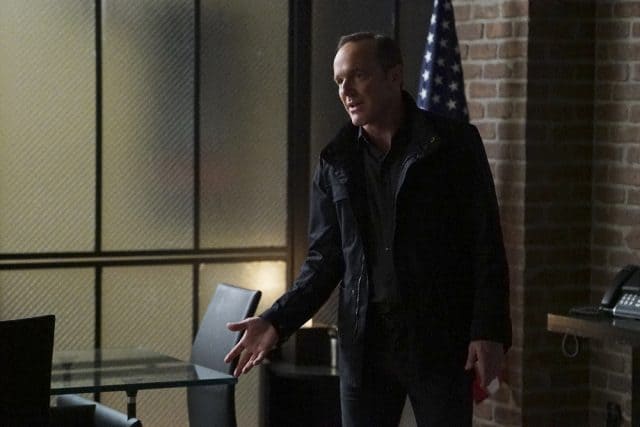 I never expected that the LMD story would be such a phenomenal, psychological exercise. Color me pleasantly surprised. Agents of SHIELD has turned this android story into a psychological thriller of sorts. The story has been emotional, exciting, and fun to watch at every corner. Putting LMD’s in the story allows actors to play multiple iterations of a character, and allows for some of the most interesting and devastating twists yet.

This week on Agents of SHIELD: Jemma and Daisy are the last two remaining members of the team who have not been replaced with LMD’s, and they must fight their way out of SHIELD HQ. Dr. Radcliffe and Aida fight to protect the framework, at some cost. Reactivated LMD May joins the fray.

This was hands down the best episode SHIELD has put out this season. Every minute was exciting, powerful and emotional. The really interesting thing about the LMD’s is that you can have a bloody fist fight between two characters who would never go there. Fitz and Simmons, for instance, would never have a physical altercation unless one of them was compromised. “Self Control” was a revolving door of fights between friends and emotional gut-punches, as teammates and lovers destroyed their LMD partners, or maybe when LMD’s kill each other.

Since this was an episode before a hiatus, Agents of SHIELD really outdid itself with the twists. Let’s see if I can count them all up. 1. Fitz is an LMD and not Daisy. 2. Aida slits Radcliffe’s wrists to keep him from tearing down the framework. 3.  Daisy and Simmons appeal to the “May” side of  LMD May, who subsequently blows herself and LMD Coulson sky high. 4. Aida’s new brain controlling android body technology. 5. Daisy’s darkhold life has her in a serious relationship with Ward. (Really, everyone’s framework identity is a bit surprising). Some of these were obviously a little more twisty than others, but they really cranked out those twists in this episode, each one of them packing an emotional punch.

Perhaps the most emotional moment, though, came from May’s LMD blowing up Coulson’s. Since these decoys really strive to be like their counterparts, it stands to reason that Daisy and Simmons could convince her that this is the right course of action. It could only ever have been May who did it, and real May would have done the same.

When SHIELD embraces the emotional, darker, action-packed side of the series, it’s at its absolute best, and “Self Control” was no exception. This may be the most emotionally charged and powerful season that SHIELD has ever done, and this episode was a perfect fit for it.

Agents of SHIELD returns to Tuesdays at 10/9c with new episodes in April.

The remaining members of the SHIELD team must battle the LMD’s, and escape to help their captive friends, on this week’s fantastic Agents of SHIELD.