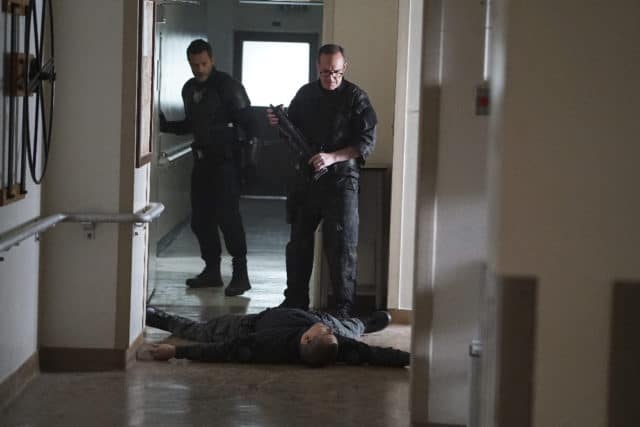 In many ways, Agents of SHIELD, has continued to raise the stakes over the years, but the framework plot has taken that to a whole new level. While it’s been a lot of fun to watch the show deliver a Matrix inspired story, SHIELD has completely run with it’s own idea and taken the show to new heights. As Aida (or Madame Hydra, whatever is preferred) has mentioned, it’s interesting to see how the world develops and evolves when she removes something like people’s regrets. It interestingly impacts many characters but plays with the idea that everyone could turn out to be anyone, it just all depends on how the variables play out along the way.

SHIELD has developed a team of characters that viewers have really fallen in love with as they have grown over the show’s four seasons on television. Now, in one swift movement, the show has turned that all on it’s head and suddenly played with the emotions surrounding these beloved characters. The biggest example of this, of course, is Fitz, who is full on evil. Fitz has always been an incredible character because of his sweet and loving personality, and Agents of SHIELD molded Fitz into an even more well-rounded person who learned to step up and face his fears of operating as a field agent and not hiding his feelings for Simmons. Yet, now SHIELD is showing the viewers how Fitz might have turned out had he developed a relationship with his father and grown with arrogance and confidence at the forefront of his personality. Fitz has certainly been the most radical change, and while it’s not the same character, it’s one of the toughest thins to watch week to week on the show because the viewers have always perceived him as a caring hero.

Meanwhile on the other hand, the show plays with the feelings towards Ward in the opposite way. Ward, when believed to be operating as a member of SHIELD, was a solid character. While he definitely felt a little too much like the cliche macho spy, his character grew on a lot of people. Yet, he tragically was an undercover agent working for Hydra and continued to be a villainous thorn in SHIELD’s side in almost every season. Ward has always been a haunting ghost for SHIELD, and while it started to feel annoying that the character would never fully go away, it has played nicely into the Framework now.  The Framework presents a world where Ward was actually one of the good guys, and it’s a blast to watch, but interestingly brings the character’s true nature and personality into question. Ward, good or bad, just seems like a character who cannot commit to something, or will always keep himself from getting truly close to people. He continues to be the double agent and it never matters what side he is on. His character has quietly very interesting because upon looking past the surface level of his Framework character, how much has he honestly changed?

At the same time, SHIELD also delivers the other side of that equation with Mace, who is fully Inhuman in the Framework. Mace was another character who, when arriving onto the show, was tough to nail down. Mainly feeling like a politician, Mace eventually showed his true desire to be seen as a hero, and then try to live up to that. While his lies and deception about having powers was pretty disappointing, the character’s willingness to step up and become a hero without powers was pretty admirable. The Framework has shown that Mace truly is a good person, and, a hero. It’s a really nice side by side comparison to Ward because it shows the positives and negatives about people’s personalities and that both sides are always going to be present. In a shocking twist, “No Regrets,” turned out to be Mace’s (presumably) last episode on Agents of SHIELD. The character, living up to his true nature, sacrificed himself to save a kid and then save all of the other characters, including an enemy May. While Mace’s tenure on the show was short lived, the character has absolutely lived up to his name, and will always be remembered properly; as the Patriot.

Agents of SHIELD has done a nice job of playing with viewer’s emotions in this second half of the season. It brings up a lot of interesting questions and reflects on the idea of how one simple event, sentence, or regret can completely alter a person’s life or personality. It feels like the show is really exploring the true nature of these characters and will test whether or not they can overlook the events of the Framework and continue onward despite knowing it wasn’t reality. The SHIELD team is slowly coming together and that is already causing their real memories to trickle back; however, it will be interesting to see if Fitz can ever be converted. Fitz has been the most unique part of the Framework, and inevitably will be the hardest to get to remember. As “No Regrets” showed, the show is not afraid to raise the stakes, so there’s no telling how the season will fully finish up.

– Wow. RIP Patriot. Mace turned out to be a really solid character on this show. Definitely going to miss him.

– In a positive turn of events, it was nice to see B.J. Britt return to the show as Trip!

– May on the Inhuman ‘roids was pretty scary. Nice to touch on how skilled she truly is though and how powerful she would be if she had powers.

– Can’t wait to further explore a world where Fitz killed Simmons… It was implied and brushed on last night, but might be the most devastating story or event we learn about in the Framework.