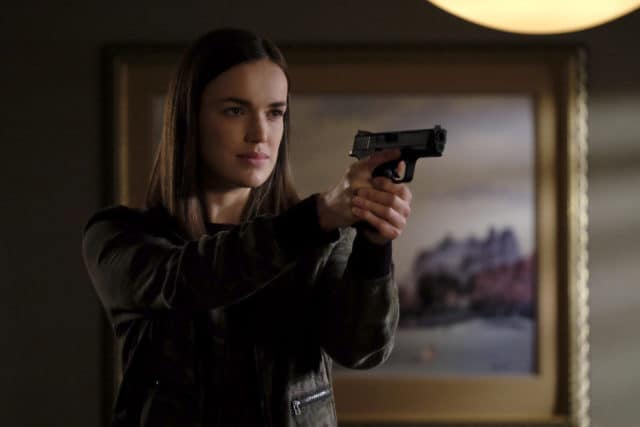 The Framework has been the best thing to happen to Agents of SHIELD as a television show because aside from being a cool comic-book type of story line, it has really pushed the character to their emotional extremes. For each main character, the show has presented the alternate reality that really could be considered better (in certain ways) than the true reality. It’s an interesting topic for the show to explore, not only because it’s fun to watch these characters that viewers love so much appear completely different from how they’ve been throughout four seasons, but because it begs the question of who would we be if one aspect of life was completely removed? The story has been very compelling and really driven Agents of SHIELD to new extremes, but, don’t forget that this has all been Aida’s (or Ophelia’s) distracting plan to become a real person in the real world.

“Farewell, Cruel World!” finally brings us back to reality (oop there goes gravity) as Aida accomplishes her mission. On one hand, it’s nice to see that almost everyone is safely back in reality and ready to finish things off, but at the same time, nobody knows what Aida is now fully capable of. Escaping the Framework was a very emotion scene, but really hits home when Fitz comes out and tries to handle how evil of a person he was. He was the only character overly corrupted or altered by Aida’s digital prison and has to wrestle with the memories of killing people, especially causing the death of Director Mace. Not only is it tough to see Agents of SHIELD mentally destroy one of the most lovable characters, but can Fitz even overcome determining what’s real anymore? Now that Aida has taken him away, she has the chance to continue manipulating Fitz into thinking he’s Leopold, the head man in Hydra, especially after the mixed memories that now include Simmons killing his father. Agents of SHIELD has not been afraid to push the show to tragic points with it’s Framework story; killing off Director Mace was a sad demise to a pure character and now Mack might not return as well, so how horrible would it be if the show chose to keep Fitz evil as well?

With Mack, things were at least bittersweet in the way it handled the character in, “Farewell, Cruel World!” It’s heartbreaking to see the character stay behind, but makes sense because of how great a parent’s love is for their child. In a way, Aida’s decision to give Mack a daughter was nearly as cruel as how she changed Fitz. Were Mack to have left the Framework in last night’s episode he would have been just as devastated as Fitz was; however, Mack would have a sense of abandonment. It’s definitely not the last that viewer’s have seen of the character in Season 4 though. Not only is Henry Simmons already listed for the final two episodes, but with Radcliffe still alive The Framework is still super relevant. It hasn’t even been confirmed or denied if Aida can travel between both worlds, but Radcliffe is easily going to find a way to escape back to reality. Agents of SHIELD cannot lose Mack, who is a big portion of the team’s heart, but it would be great if the show sent his character out on a high note, giving him the best of both worlds (literally) and letting Radcliffe transfer Hope to the real world like Aida while the both of them making it out as well.

This is one of the reasons it would be fun to see Agents of SHIELD get one more season though, because it would make anything possible for one final ride. Despite the show’s inability to get rid of Grant Ward, he has always been a major part of SHIELD’s character group. The Framework has finally turned Ward into an incredible character, allowing him to finally operate as a true and honest hero. Thus far, hero-Ward has been the best use of Brett Dalton and also let him deliver some great performances this season. It wouldn’t be right for Agents of SHIELD to have a final sendoff without incorporating the character. The Framework opens up the ability to bring back anyone, so there’s no way that the show moves on without bringing the character back to reality before it ends.

The Framework has brought a ton of twists and turns to Agents of SHIELD, which has made the show a lot of fun to watch. Returning to reality has made even more interesting now that Aida has full on powers, becoming a threat to SHIELD that has never really been seen before. In the end, it’s funny to see that Hydra truly never dies and will be awesome that Ghost Rider is going to play a major factor into bringing them down (possibly for good). Agents of SHIELD has always revolved around the battle between SHIELD and Hydra, so it’s fitting that the show is finishing full circle. Yet, as mentioned before, the show has gone to much darker places than viewers could have ever expected, so there’s no telling whether the show will conclude it’s season happily, or there are more casualties to come.

– Jesus Agents of SHIELD just loves torturing Fitz. Really hoping he can hold onto his true reality and not be deceived by Aida.

– Hoping that Mack chooses to wake up at some point. That or Radcliffe creates a way to send seismic pulses to the backdoor which they can escape through. Very sad for Yo-yo and pretty lame that Daisy made zero attempt to bring that up to him…

– Pretty cool that Aida has powers now. I hope they are limited to some extent but it sets up for a really sweet battle between her, Daisy and Ghost Rider.

– Similar to Ward, it would be fun for the show to bring back Trip as well. While not as important throughout the show’s four seasons, why not give another previously solid character a way to return for the goodbye?