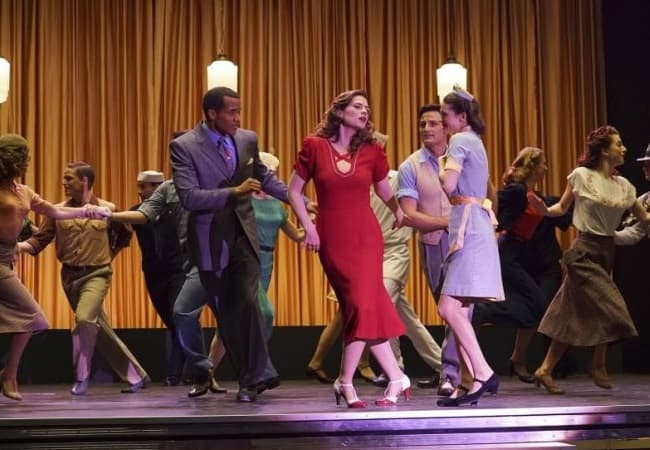 After a very solid two hour back-to-back block last week, this week’s episodes of Agent Carter had a similar stability to them while also having some shake-y elements as we get ready for the season finale next week.

I wasn’t surprised to see Jarvis take such dark turns this week after what Whitney did to Ana in the last episode and it was definitely interesting to see James D’Arcy get to play a very aggressive version of his character. However, there were times when I found the writing a little problematic or more like very predictable. Nothing about Jarvis’ behavior stood out from other characters on other shows or films that are dealing with the aftermath of something tragic.

It was definitely in the 9th episode where his anger crossed the line with his awful comment to Peggy how people around her always seem to die. Even though it was out of anger that he said it, I just feel that this is a character that would never go down to that level. But maybe I’m being too nitpicky, it did however feel out of character big time. However, he redeems himself several times in the episode so at the end of it all, it was a weak character moment, but a moment that I could forgive.

As much as I have enjoyed Whitney Frost this season, I for some reason didn’t enjoy her in these two episodes. Her anger and frustration was hilarious to watch because everything kept going wrong for her, step by step, as Jason was the one to get absorbed into the big Zero Matter cloud. It’s natural that we laugh at our villains every once in a while because we want the heroes to win. However, these weren’t her strongest episodes in the season and that’s a shame, in my opinion. We are just getting ready to wrap up the season and this is where you normally want the villain to be at his/her top, but we still got one more episode.

What really stole the show this week was without doubt the fantastic and enjoyable musical performance at the start of part two where we also got the return of Angie for a few minutes. A part of me will still never understand why they weren’t able to bring her back for multple episodes, but I guess we’ll never know the answer to that. But those first 5 minutes of the characters breaking into song and dance, is not just a highlight for this episode, but this TV week as a whole. To any comic book TV show-runners that may read this: Agent Carter did it, now it’s your turn — bring on some musicals!

Overall, these two episodes worked for most of the time and the last few minutes of part two did end on a big cliffhanger as Jason literally blows up with all the Zero Matter energy that he now controls.

Jarvis takes a dark turn after Whitney’s attack on Ana last week and we get a fantastic musical sequence in this week’s episodes of Agent Carter.