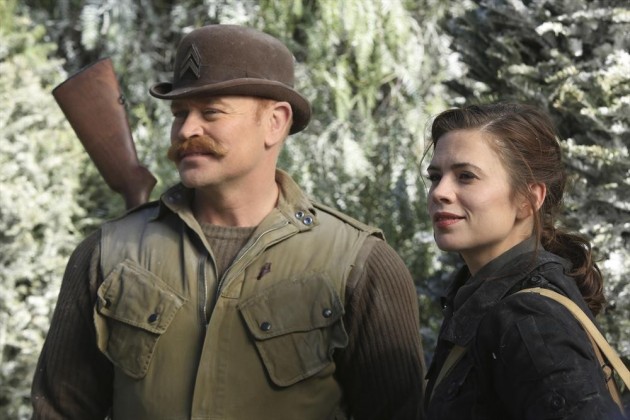 After back-to-back solid but somewhat slow episodes, Agent Carter continued its first season last night with its most action-packed installment yet, as Peggy and Thompson headed to Russia and fought alongside the Howling Commandos, including Neal McDonough’s Dum-Dum Dugan. “The Iron Ceiling” was easily Agent Carter‘s most complete episode since the series premiere, as it dealt with a lot of moving parts incredibly well, giving depth to a character that was in desperate need of it, while also delivering some superb action.

Let’s start with the character in question, Chad Michael Murray’s Jack Thompson, who throughout the show’s first four episodes has pretty much been a super-macho caricature. Both he and Dooley have personified the sexism and superiority that many men displayed during the 1940’s to a nauseating, almost cartoonish degree. However, last night’s Agent Carter was able to give some insight into why Thompson consistently puts on the overly masculine persona that we’ve seen from him, as we (along with Peggy) learned that he received his Navy Cross for killing six Japanese soldiers that walked into his camp in the middle of the night–six Japanese soldiers that he didn’t realize at the time were carrying a white flag, ready to surrender.

I can’t stress enough just how well-done both Thompson’s scene around the campfire and, later on, his conversation with Peggy on the plane ride home were. The second scene, in particular, may have been my favorite moment on Agent Carter to date, as both Murray and Hayley Atwell were phenomenal; he showed us a new, more honest side to Thompson, while her eyes illustrated just how differently Peggy now sees her colleague. Their exchange (“I’ve been trying to tell that story since I came home from war.” “You just did”), plus the fact that Peggy ends up going to get a drink with Thompson at the end of the episode, has me hoping that we’ll see a better, warmer relationship between the pair moving forward.

Furthermore, while I thoroughly enjoyed the great action sequences we got in Russia (and the fact that, unlike other Marvel films and series, Agent Carter is willing to kill off people to show the seriousness of what Peggy and co. are dealing with), most of the highlights from “The Iron Ceiling” were its quieter moments. I loved Peggy and Dugan reflecting on how much they both miss Steve and was very interested while watching Dottie (more on her in a minute) sneak into Peggy’s bedroom, looking at herself in the mirror and perhaps even imagining what life would be like if she had grown up like Peggy instead of having the harsh childhood we saw her endure in the opening moments of the episode.

And speaking of Dottie, for those who had suspected (even though it had been confirmed already), this episode made it clear that she was a part of the Black Widow program in Russia, meaning that not only is she a deadly threat to Peggy and the SSR but that she is almost certainly working for Leviathan. There’s definitely more to the story here (as we had Dooley digging deeper into this whole Russian conspiracy in last night’s episode), and I’m just hoping that after all the mystery, we get a satisfying reveal as to what exactly is going on here.

But Peggy may not be a part of the SSR long enough to help uncover that mystery, as Sousa is beginning to piece together that she was the blonde at the party from the series premiere. Between his suspicions, not to mention Dottie finding the photos of Stark’s weapons in her room, it looks like things will be getting a lot worse for Peggy before they get better, and I’m curious to see who will stand by her side and who will turn against her in this season’s final three episodes.

– Sorry for the lateness of this review. I regularly cover Parks and Rec, New Girl, and Justified on Tuesday nights, so I was only able to watch Agent Carter this afternoon.

– But I’m so glad I got the chance to review this show for at least one week, and hope you guys enjoyed my thoughts on the episode. Andy will be back to cover it next week and for the rest of the season. Here’s hoping the last three episodes are even better than this one!

What did everyone else think about last night’s episode of Agent Carter?