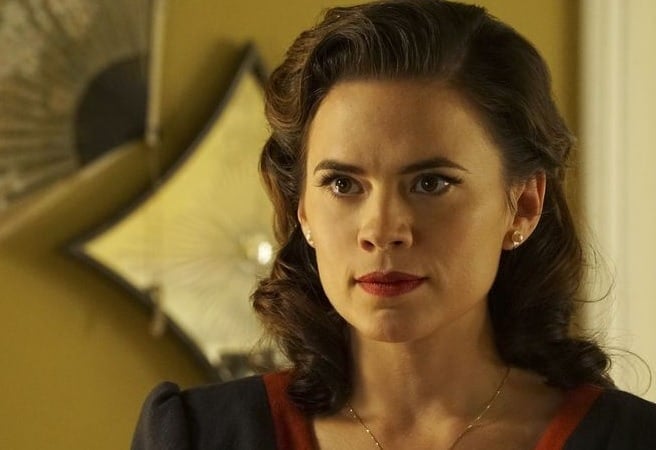 After the impressive 2-hour season premiere last week, this week’s episode of Agent Carter featured the return of a beloved Marvel Cinematic Universe character, Howard Stark, as Peggy continues to learn more about Zero Matter as we see how it is affecting Whitney Frost.

A part of me is still processing the idea of Howard suddenly getting into film making, building his own movie production company and all of that. There’s nothing wrong with it, it was just amusing that at one point in his life, Tony Stark’s father got into film making. Either way, it was great to see Dominic Cooper again as Howard, who I hope shows up a few more times this season, even though I know his Preacher schedule may have prevented that from happening. He just adds that wittiness that only he can bring to the show. If ABC ever wants to kick of a Marvel’s Howard Stark mini-series (3-4 episodes), sign me up for that. Heck even if those episodes would only show us him having had way too much coffee, I would watch that.

While I didn’t get a strong impression of her last week, this episode took care of it very well as Whitney Frost starts to grow on me. As Peggy and her gang is learning more about Zero Matter, so is Whitney and someone is definitely starting to love the new powers that she has been given. Although the little twist at the end that the crack on her forehead is growing the more she uses her powers, made me intrigued. As I mentioned last week, I have very little knowledge about Darkforce in the comics and seeing how they play with it through Whitney Frost is a good way to introduce that concept to viewers as well as to people who will be seeing Doctor Strange later this year.

The character of Thompson continues to be a mixed bag for me ever since Season 1, but I enjoy not knowing where to put him still. Is he a good guy or a bad guy in disguise a la Agents of S.H.I.E.L.D.’s Grant Ward? At this point, it’s hard to say, but I feel Season 2 might give him a completely new role, something is up. It just wouldn’t surprise me if he actually switches sides and joins the Arena Club as a genuine member. I could be reading into something way too much and he may in fact just be doing a simple infiltration of the Arena Club, but only time will tell.

Overall, “Better Angels” was a strong follow-up to the premiere with Whitney getting more fleshed out, Wilkes popping up (despite that he is still trapped in Zero Matters) and Howard Stark just being the great lovable character with his swagger. Also, “Better Angels” had so many great one-liners, I still think Sousa wins with his “I speak Hollywood now.” one-liner. 7 episodes remaining and Season 2 continues its great path that it started on from last week.

After a strong season premiere from last week, this week’s Agent Carter brings back Howard Stark as Peggy and the gang learn more about Zero Matter.