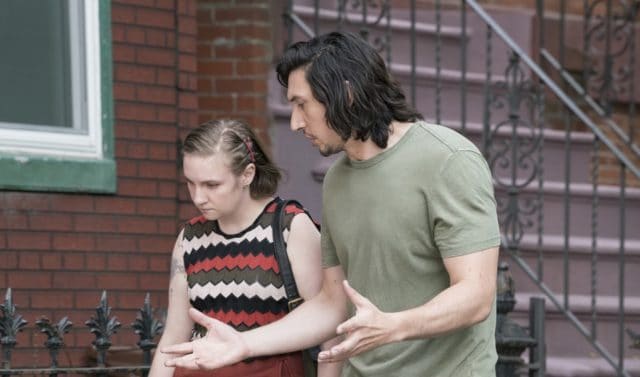 I had a chance to watch the latest episode of Girls last night and I must admit that this season’s been excellent.  Lena Dunham is really showing some amazing acting chops and her character Hannah Horvath is evolving into something I don’t think we expected.   Her acceptance of her pregnancy and desire to have a child has put her even more on the “adult” path than she seems to have been seeking but not necessarily embraced yet.   But I wanted to specifically focus on her relationship with Adam as that was the big cliffhanger at the end of the episode.

When she tells Adam she’s pregnant, we all collectively knew that a major alarm sounded in Adam’s head.  It seems pretty obvious that Adam is going to want to get back together with her.  If making a movie about their relationship isn’t an indication then I don’t know what is.   However, should these two have a fairy tale ending? I think that’s what we’re going to be asking for the rest of the season.  In my opinion, don’t do it.  I happen to agree with Bustle who has a solid theory and also stated they don’t think Adam and Hannah should get back together.

There are a few reasons these two should never get back together and it’s simple.  As lovely it would be to watch these two ride off into the sunset together, Adam himself makes the point that their original relationship was “too intense” to last.  Let’s translate what actually means.  There’s no such thing as too intense.   They were simply too young to understand what a real relationship is.  Think about the two of them while they were together.  Tons of passion, crazy fighting, and very much driven by primal emotions rather than reasoning.  Granted you need both in a relationship but theirs had zero reasoning or logic.   Does that sound familiar?  It’s called being in your 20s when you don’t really know what the hell you want.  And right now Adam appears to be clinging to what he once had with Hannah while Hannah is trying to move on.

In order to move on, these two cannot get back together.  I think that these two need to go their own ways, become adults, find a life for themselves.  If in the future they find that their lives are still compatible (which I can almost guarantee they wouldn’t be) then perhaps there’s a future for them down the road.   But if you look at Hannah’s life in the past season of episodes, what has been her central theme?  Growing up.  That’s why she was in a relationship with Fran and that’s why she’s decided to have a baby.  Adam is still a child in many ways.  His relationship with Jessa too, was primal and in his head I think that’ he’s beginning to understand that and realize that relationships based on just that don’t work.  But trying again with Hannah isn’t the right move.

And keep in mind, Hannah too is struggling with this otherwise she wouldn’t have opened her laptop and watched Adam’s movie.  The question is, can she resist and stay the course?