Home
Movies
A Master and Commander Prequel Is In The Works 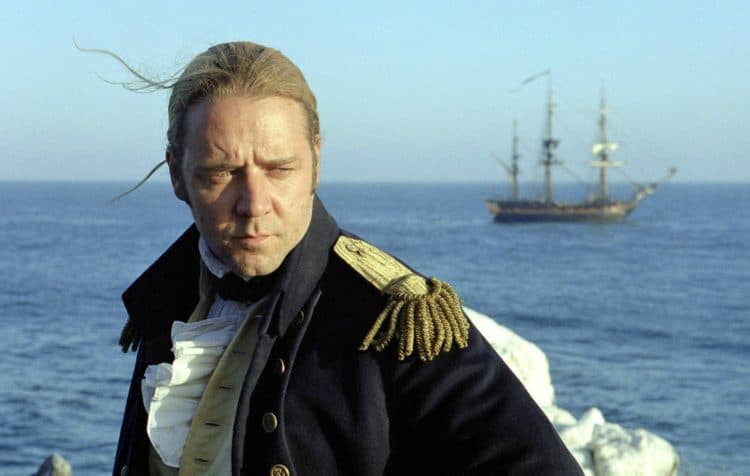 A very underrated movie from 2003 is Master and Commander: The Far Side of the World. Yes, it was nominated for ten Academy Awards, but after 2003, it seemed like not too many people were talking about it. Then again, that’s probably because The Lord of the Rings: The Return of the King came out the same year. Yeah, it’s pretty hard to top that movie, considering it’s one of the greatest films of all time. Hey, that’s just my opinion, but I know very many movie fans out there agree with me. Is it really my fault Peter Jackson made such a masterpiece? Say what you want about the Oscars, but Return of the King deserved all the awards it got.

Now with that in mind, I would place Master and Commander on my top five favorite movies of 2003. If you’ve haven’t seen it, then I suggest you check it out. A little spoiler warning, about ninety percent of it takes place on a nineteenth century war ship. And during the scenes when the crew is on land, they’re not there very long. Heck, they spend some time on the Galapagos Islands and just interact with each other the whole time. The rest of the time we get to see Dr. Stephen Maturin (Paul Bettany) recover from a bullet wound and collect iguanas.

Sounds kind of boring on the surface, but a film like this gives audiences a unique perspective that we don’t usually get to see in movies. And that’s precisely why I’m all in for a prequel for a Master and Commander prequel. Will it have Russell Crowe come back as Captain Jack Aubrey? Probably not, since he’s older now, but that’s okay.

Master and Commander was actually adapted from a novel series written by Patrick O’Brian. They center around Jack Aubrey’s naval career with his friend and the ship’s surgeon, Stephen Maturin, as his sort-of sidekick. The movie itself is set during the height of Jack Aubrey’s naval career, as he is tasked with intercepting a French privateer ship called the Acheron during the Napoleonic Wars. Aubrey’s ship is called the HMS Surprise, which is much smaller than the French war vessel. Although Aubrey’s officers continuously tell him the Acheron is out of their class, Aubrey insists that they need to pursue it.

That’s how the movie begins, but everything that happened in the middle is what really stood out. For me, it was just very intriguing to see how accurately the movie showed what life was like for sailors during that time. In short, it was rather rough. Just imagine being stuck on a dirty ship for months surrounded by other sailors who are growing restless. The crew of the Surprise went through this, but they found ways to maintain their resolve. For a movie that takes place mostly on a ship, it sure made for an interesting perspective. A life at sea isn’t as glorious as it sounds.

If the first Master and Commander movie takes place at the height of Captain Jack Aubrey’s naval career, it only makes sense for the next movie to be a prequel. The first movie shows Jack as a competent, but ambitious commander who is widely respected by his crew. Even thought they disagree with him on several of his decisions, they still follow him. Jack Aubrey is the kind of leader who will pursue something, despite many others telling him it’s unlikely. It’s a good quality for a leader, but even better for a main protagonist.

The Master and Commander prequel can show us the early days of his naval career when he was a Midshipman or a Lieutenant. If he was ambitious as a Captain, he was surely the same long before he reached that rank. And I’m guessing not everyone respected him nearly as much. As someone who has never read the Master and Commander books, I would have little knowledge of what I’d be getting into for the prequel. However, I actually think that makes it better, only because I’ll be going into it fresh.

I’m not usually the kind of guy who reads the book before the movie comes out for that reason. Like many movies that were adapted from books, I know there will be some changes made. For me, I’m just very curious to see how Jack Aubrey worked his way to becoming the Captain of his own ship. This can actually dive deeper into the brutal life of a sailor from that time. A young Jack Aubrey will probably be more naive and have a rougher time adjusting to sailor life, but we see the man he eventually becomes. His early sailor days will make him stronger in time and make him inseparable from the sailor life.

But it’s also not Master and Commander without his friend Stephen Maturin. I would be very interested in seeing how he and Jack met and developed their friendship. The contrast in their personalities is what really made their chemistry work and I can only imagine what their first interaction was like. Was Jack less friendly to Stephen because of his lack of sailor experience? I would expect so, but they obviously became close friends overtime, and that’s something the Master and Commander prequel needs to show us.

This Master and Commander prequel will be written by Patrick Ness, the screenwriter behind the 2016 movie, A Monster Calls. There is no director attached to the project yet, but let’s hope Peter Weir, the director of the first movie, returns to helm it. Again, don’t expect Russell Crowe and Paul Bettany to return, but I’m still excited for this movie.