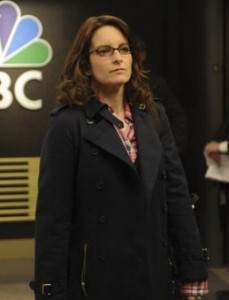 30 Rock season 6 retreads the fifteenth episode of season 6 with “Kidnapped by Danger,” where Liz finds herself in a yearly rut while Jack struggles to come up with an idea that can re-invent KableTown, and Hazel (Kristen Schaal) continues her obsession with Liz. A very reflective, and meditative half-hour, “The Shower Principle” ultimately seems like its own worst enemy rather than a testament to the series’ survival.

I’m continually fascinated, and perhaps even a bit unnerved by what ‘˜s been going on with 30 Rock this season. On the one hand, the show seems comfortable enough in its age and purpose that it doesn’t mind repeating, or even poking fun at itself, yet simultaneously testing out the water for new ideas, and actual growth. 30 Rock has always prided itself on knowing exactly what it wants to be, yet now, like Liz lemon herself, the show seems uncertain of how it wants to handle aging. It’s an impossible concept not to consider when entering the sixth season, but a few points in the last run have episodes have really hammered the idea home.

For instance, though I didn’t find time to mention it last week, Weird Al’s credits coda parody of the 30 Rock theme song seemed especially barbed, almost like a pissed-off teenager reaching a point where it defiantly decides that like it or not, it is what it is and isn’t going to change. 30 Rock in its prime garnered multiple Emmy wins, so I’m not sure what exactly it has to complain about if ratings slip by the sixth season, should the show slip quietly into that good night. And why even be bothered if critics accuse the show of being past its prime, or repetitive? 30 Rock has more than established its impact and legacy.

Of course, repetition being the theme of the night, most parody shows will inevitably reach that point of self-parodying repetition, which walks a fine like. I prefer invention upon the theme, akin to South Park‘s brilliant subversion of its own pilot becoming a repeat for ‘Cancelled,’moreso than Scrubs, or The Simpsons‘wry, yet simplistic referencing of its own recycled plots. ‘The Shower Principle’reaches that point of meta-reference overflow wherein the show deliberately calls out its own age, and repetition, with varying degrees of success. 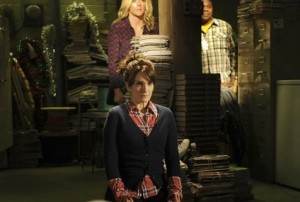 Had ‘The Shower Principle’left the meta-referencing as a courteous nod in the beginning, as Liz slowly realizes in conversation with her accountant that she tries to change things on a yearly basis, the episode might have succeeded gracefully. And to wit, utilizing her journal as a road map / omniscient guide to right usual wrongs might have made for a fun twist on the concept, but by the end 30 Rock simply goes for broke and draws manic attention to the fact that Tracy will always have some scheme that grows increasingly complex, Jenna’s vanity will always necessitate some kind of special attention, Jack will solve Liz’s problems with his hyper-competence, and Cerie will always drive the writing staff wild. And even then, it’d be an on-the-nose parody to forgive, if they didn’t simply step a toe over the line with Kenneth gleefully announcing his re-application to the page program, or Hazel’s pathetic attempt to differentiate herself, which Liz (and thereby the writers) simply dismiss.

Up until Liz’s cathartic outburst, I had done my best to focus on the things that actually had given new life to 30 Rock this season , and even made ‘The Shower Principle’a meditation on itself rather than a sad elegy. For instance, I’m continually fond of Kristen Schaal’s portrayal of Hazel, however hackneyed the idea that she would endlessly covet Liz Lemon’s life. It’s not the most effective of characterizations to be sure, but despite Liz’s words toward the end, it’s at least something different to fill the void left by Kenneth. Hazel is weird enough that she matches the tone of the personalities around her, but different enough in her bizarrely sexualized and naÃ¯ve presence that she makes an effective contrast to Kenneth, who admittedly still needs a place of his own to avoid awkwardly intruding on other scenes throughout the episode.

And on the same token, I enjoyed Liz’s meditation on the root of her routines, in its play-like staging, as well as Jack’s uber-efficient meditation that solving Liz’s problems were the key to refreshing his own. Once again, its weird, but unique enough to suggest continued signs of life in the aging series. And who’s to say that by episode’s end Liz’s words won’t prove true, and Jack’s venture into building KableTown couches couldn’t provide a new endeavor for the series to play with, or Liz breaking her rut?

I’m certainly not one to believe in a renaissance for 30 Rock at this point, but if the show can avoid being so cynical about its age, we might actually enjoy its golden years.