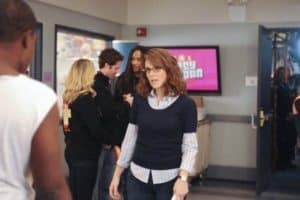 Something that has been regrettably missing from 30 Rock lately has been references to Star Wars. They are usually fairly obscure references that only people who have seen the films more than just a few times would get. Thankfully, we were treated to a fantastic Star Wars reference. As Liz discovers the crew acting abnormally comfortable, she asks, “What is this? Jabba’s pleasure skiff?”

Star Wars nerdery aside, tonight’s 30 Rock hit the proverbial ball out of the proverbial park. It was reminiscent of earlier episodes. In order to not be completely hated by the crew, Liz goes to ridiculous lengths to make herself popular despite be discouraged by Tracy and Jenna. Meanwhile, Jack begins a mission to find design flaws in GE’s new microwave out of jealousy. Hearing Jack’s voice on a dictionary website, the writers decide to prank Pete.

Lutz, the hands-down saddest character on the show, delivered as he does whenever he’s on screen. He has such a sick desperation for validation and is usually ignored or ridiculed. Liz is not all that different. Her quest to be accepted by the crew is one of the older running gags on the show, often doing awful things like giving away her grandfather’s watch.

Throughout the series, viewers are treated to bits and pieces of Jack’s personal history. The writers of 30 Rock have created and molded one of the most interesting characters ever on a network comedy. From working his way through college being voted “Most” at Harvard to his very complicated youth being raised by an insane woman, there is always something new to learn about John Francis Donaghy.

“College” proved to be one of the best episodes of the season. Not only were the jokes rapid-fire, they were clever. Instead of sacrificing quality for quantity, or vice-versa, 30 Rock proves that it’s possible to have both.