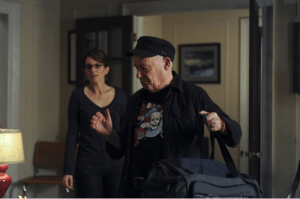 Mr. Lemon feels that he needs a a break from Mrs. Lemon, so he travels to New York looking like a man who’s “been on spring break for 300 years.” Meanwhile, Avery forbids Jack from being Liz’s mentor because she feels that such a close mentor/mentee relationship between coworkers is inappropriate. Jack must now find a new mentee. Tracy, having seen his pre-taped T.V. obituary, begins a mission to rework it to be more positive and Jenna begins a mission to become important enough to have a televised obituary.

There was a time (around the end of season one and beginning of season two) where I thought that Liz and Jack’s relationship would blossom into some sort of romantic but I had definitely misread the subtleties of their mentor/mentee relationship. Obviously, this was an entirely better direction for the show. This week’s 30 Rock expanded on the subtleties of this pairing. Toward the end of season two, when Jack briefly goes to work in the Bush administration, we got a taste of how the two operate without each other. As Jack described in tonight’s episode, it’s a symbiotic relationship. Jack is a great white while Liz is a smaller fish that eats his parasites.

Jenna is bat-crap crazy once again. It would be strange seeing anyone else other than Jane Krakowsi playing Jenna. Krakowski certainly nails the insane act pitch-perfectly. It’s kind of frightening how believably insane she can appear, but half of that credit is due to the excellent writing staff.

Unfortunately, Grizz, Dot Com and the bilk of the TGS writing staff were missing. Buck Henry was able to carry their weight, thankfully. The “out of touch dad” character is a bit of a clichÃ© (Ed Hardy shirts, gigantic cell phone), but it certainly works at the hands of Henry.