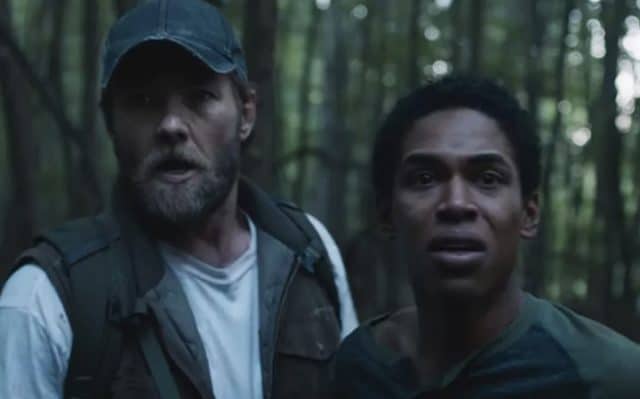 When the world ends it seems that it might do so in an apocalyptic plague as movies like It Comes at Night seems to suggest. The film is all about a small family of survivors that have managed to stay alive and uninfected by the virus that has been spread worldwide by following simple rules. Once they allow another family into their world however they soon find reasons to mistrust the newcomers and eventually end up turning on them when the rules are broken and the nightmare is allowed into their household. It’s a film about loss and the price of seclusion from the rest of humanity, but it also points out the very frailty of the species.

10. Will’s interrogation scene took a while to get right.

The boom operator had to sit in a tree for half a day just to get the audio right.

9. The film premiered at the 2017 Overlook Film Festival.

A lot of films get previewed at these festivals first and foremost just to see if they’re worth the effort and of course to give a look at something new and exciting.

8. The title was decided before the script was even written.

It has a lot to do with the idea that while nighttime is when people rest it is also the time when anxieties and fears are at their sharpest.

7. There’s a picture of Bill Withers on one of the walls in the house.

If you have to be told who Bill Withers is you might have missed out on Lean On Me, the popular song that’s been around for a long time now.

6. This is another film in which Joel Edgerton’s character was a teacher.

In the film Warrior his character was also a teacher, but for that movie his character went into the UFC looking to make a name for himself and earn some prize money.

5. The actor that played Travis waxed his back for his role.

He wanted his back to look a little better for a shower scene that he was in so he went ahead and waxed his back.

4. There was a non-disclosure agreement signed by the cast to never disclose what ‘comes at night’.

A lot of people seem to think that Travis’ dreams were what came at night, which would have been kind of simple and not all that spooky.

3. It’s thought that the two men that attack Paul and Will in the forest could be father and son.

Their similar appearance is what leads a lot of people to believe this.

2. It’s been surmised that Will might have been an alcoholic.

The look that Will gives when Travis brings out the bottle of whisky is the type that many alcoholics might have when being presented with such temptation.

1. Every time Travis dreams the shot would go to cinema-scope style, and when he wakes it would slip back out of it.

This is done to give the greater sense of a dreamscape in which Travis is existing at the moment. In waking it’s no longer desired.

This seems like kind of an odd but spooky movie, so it might be worth the effort.