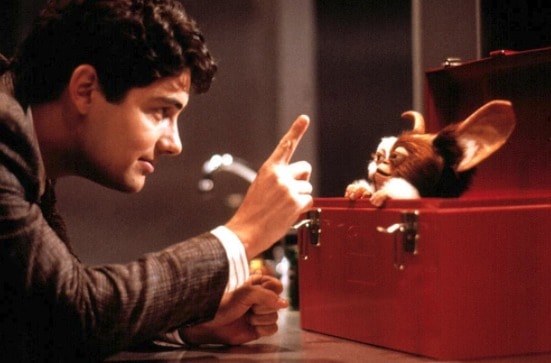 Zach Galligan is back and teasing a possibility of coming out with a Gremlins 3 via Twitter. I’ll break down and admit that I liked the first one and there were even parts about the second one that weren’t all that bad, but while the idea is far from being played out, it needs to be looked at carefully and really given an update for modern times. Plot holes and various ideas that might not fit any longer into today’s cinema need to be addressed and the whole idea of the movie should be approached cautiously until agreements can be made on how to handle it. Whether it stays light or goes dark is kind of up to those in charge but a darker bent might push it more firmly into the horror genre, which could be far more lucrative really. The only real draw for kids would be Gizmo at this point, and any other Mogwai if the creators decided to give the go ahead on this kind of idea.

Think about this though, while Gizmo is the protagonist and the other Gremlins are the antagonists, why not switch it up a bit? We’ve seen bad guys turn from the dark and good guys lose their way and go dark, so why not push that idea in Gremlins? It’d be strange to see a Gremlin turning on his own kind except to cause mischief as we’ve seen before, but it could be something more along the lines of a Gremlin thinking that they don’t want to cause trouble and just want to be left alone. That kind of messes with the whole mythos of the creatures being nothing more trouble-making, chaotic, and altogether evil in a comical sense, but it could be interesting. The Mogwai going bad seems more like it could be kind of a flop of an idea, but it’s still something that could possibly be developed.

And the scale of the film could be worked on as well. In the first one they invaded a small town and tore the place apart. In the second they were able to gain control of a skyscraper. What in the world could be done for the third film? Billy Peltzer would almost have to return, as would Gizmo, but the others would be in question. It’d be interesting to see Corey Feldman come back, but it might not be all that feasible. In any case if things really got crazy a person could almost create an entire Gremlin infestation that spread like a virus from town to town. Or even better, how about having the third story take place near somewhere such as the east coast or near a huge body of water? Billy and Gizmo would know better than to mess with it, but perhaps there’s another Mogwai out there that’s been taken advantage of or mistreated and wants to pay the humans back for their cruelty. That’s just one idea, there could be dozens that stem off of the main theme of the movies.

Gizmo: "Dad, I wanna do another movie."