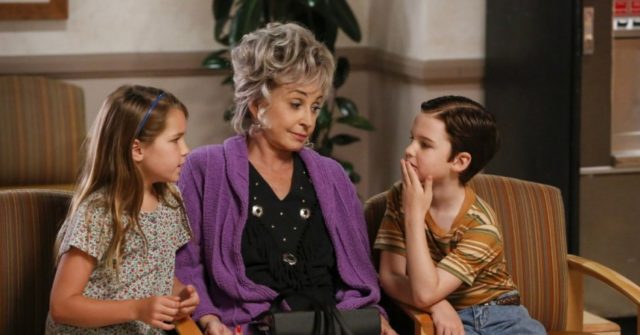 Young Sheldon is giving another familiar name in Sheldon’s world a new face. The only person Sheldon loves more in the world besides Amy and his mother is his Meemaw. First played by Academy Award nominated actress June Squibb on The Big Bang Theory, Meemaw is known as the person with a bit of a stronger hand who guided Sheldon. Yet she still had that sweetness about her every time she called her grandson ‘Moonpie’. Meemaw’s younger version is played by Designing Women‘s Annie Potts with equal parts hilarity and wise cracks. She has no nonsense answers for Sheldon, which at this point only confuse him more. Sheldon is baffled by his big greatest foes: lying, faith, and his nemesis Billy Driscoll’s eggs.

Meemaw knows all, sees all, and tells it like it is. That is, unless she is two hours into a cigarette and some type of alcohol. Unlike her daughter Mary, Meemaw doesn’t believe in sheltering Sheldon from what he needs to know. She tries and fails to teach Sheldon the art of bluffing and sarcasm, so there’s nothing she or anyone could say to make Sheldon believe in God. Meemaw doesn’t have a great arc this week, other than proving she is the ‘cool’ grandma. It’s because she’s not that hands-on that we finally have answers to quite a few questions we had about grown-up Sheldon Cooper. Why did Sheldon refuse to drive a car until he was in his 30’s? He suffered through a car ride with his 14-year old brother behind the wheel. Why does Sheldon have an aversion to hospitals? He saw his father in one when he had his first heart attack, and it scared him. Sheldon does pray for his brother to get better, but he prays to Blaise Pascal, not God. The miracle that was George Sr.’s recovery is not all that miraculous, given what we know is coming. At least Sheldon has found someone to pray to when the time comes.

Did Meemaw’s presence help anything in the Cooper’s time of need, or was Sheldon simply more confused than ever before?

Young Sheldon‘s Meemaw doesn’t quite help Sheldon figure out his feelings on faith and bluffing.