Home
Television
Wrecked Review: What if Lost was a comedy? 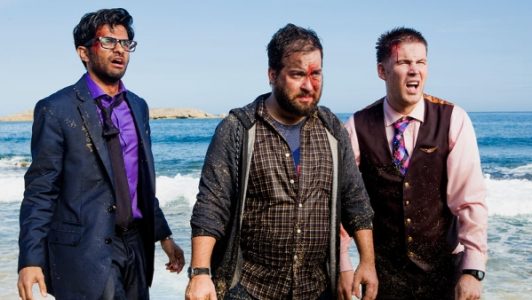 Lost seems like the easiest show to parody, yet why has it taken 6 years to happen? Since the series finale we’ve seen many attempts at copying the formula to be the next Lost, but never a sitcom satire. Let me preface this all by saying Lost is my all-time favorite show and I will defend the finale especially to my death. I’ll continue to do so in my own flash sideways world before letting go and moving on with the people that mattered most in my life. Because no, we are all not dead all along. That said, when I heard of TBS’ Wrecked, I immediately needed to check it out.

Losties shouldn’t be afraid to watch Wrecked because so far it’s really funny. Nothing offensive or disrespectful to the original show, instead they are already taking the liberty of rewriting history/canon by (spoiler!) killing their Jack Shephard character. As any fan would know by now, Jack was supposed to be killed off in the Lost pilot. He ended up becoming the central character after rising to be the leader of the people. That’s where Wrecked finds most of its humor in this first episode. Their “Jack” is named Liam, played by British actor James Scott most notably known for his role as EJ on the soap opera Days of Our Lives. Needless to say, he’s handsome and the other two main characters Owen and Danny repeatedly point that out. I actually see Liam as more of their version of Boone, aka the most conventionally attractive survivor who died in season 1.

I first saw articles posted after the pilot aired last night talking about why they chose to kill their Jack character already. After watching the episode myself, I was seeing more parallels to Owen as “Jack.” After Liam was crushed to death by the front of the plane, Owen and Danny sort of rise to the leadership role together but more so it was all Owen. Mirroring Jack’s early season 1 campfire “live together, die alone” speech, Owen rallied the survivors with a severely less encouraging thought: “we should all be very dead right now, and we’re not.” That was after someone asked, “why should we listen to him?” and he responded, “Cause I’m a g-d flight attendant.” It works, at least in conjunction with the other guy pulling the drink cart out of the water onto the beach and everyone proceeding to get wasted their first night on this island. And it makes perfect sense since so many who watched Lost wondered why the doctor became the leader in the first place too.

Also worth noting is the gender swap of the John Locke character. Karen makes her first appearance on the beach in a bloodied shirt after just killing a boar with her own hands for food for the group. Not every character perfectly matches to a Lost counterpoint but I think that’s also what makes this show so interesting and unique in its own right. I’m very curious to see how it handles the larger mysteries of the island, if at all. I have to imagine there’ll be some equivalent to the Smoke Monster and of course a hatch.

If I wasn’t a diehard Lost fan or even a casual one, I wouldn’t know what to make of Wrecked. If that happens to be you, please share your thoughts! I, for one, am pleasantly surprised and intrigued! Definitely a fun summer show to go along with my rewatch.

Wrecked Season 1 Episode 1 Review: "All is Not Lost"

A group of plane crash survivors struggle to survive on this Lost satire.