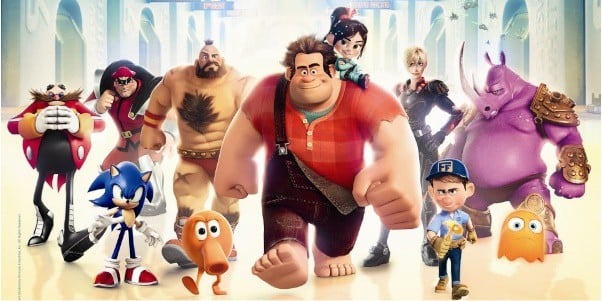 The name for the sequel for Wreck-It Ralph was officially revealed at this year’s Cinemacon.  But today, Disney took to Twitter to release a graphic of the sequel entitled “Ralph Breaks the Internet.”  The movie is set to be in theaters on March 9th 2018.   Jane Lynch (the original’s Sergeant Calhoun) and Jack McBrayer (who played Fix-it Felix) will be returning alongside John C.Reilly as Ralph and Sarah Silverman as Vanellope von Schweetz .  The original creatives for the film will be back as well.  At Cinemacon they revealed their excitement. Directors Rich Moore and Phil Johnston, and producer Clark Spencer said:

“To take these characters we love and have them enter the enormous world of the internet has given us so much to explore,” said Moore in a press release. “Our production team has been hard at work designing a world that takes something we all think we know — the internet — but shows it in a whole new, imaginative way.”

“We’re so excited to be working with Ralph, Vanellope von Schweetz, Fix-It Felix and Sergeant Calhoun again,” said Johnston, “and we have new characters we look forward to unveiling. At the center of this film, as in the first one, is the relationship between Ralph and Vanellope, two once-outcasts, who in each other, found true friendship.”

People seem to forget that backin 2012 Wreck-It Ralph had the highest opening weekend of any Disney Animated Film ever.   Given that the movie isn’t out for a year, I expect that a year’s worth of marketing should put that 2012 figure to shame, especially now that Ralph is tackling the internet and should appeal to an even wider fan base.