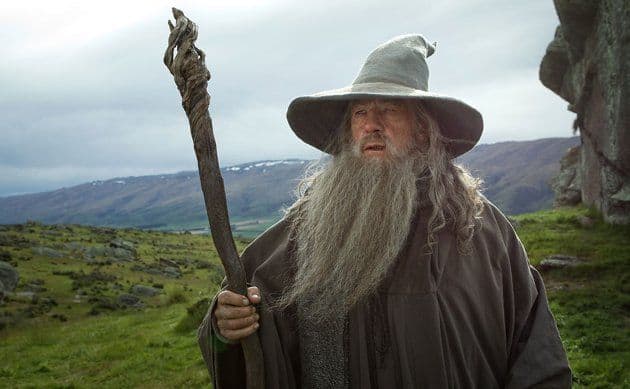 Anyone ever hear about that time that Ian McKellan broke down in tears on the set of The Hobbit? To start with he wasn’t all that keyed in on the idea of returning as Gandalf, but really no one else could have done it even half as convincingly as he could. Despite the fact that the character is a part of classic literature no one has managed to bring him to life like McKellan has. And yet strangely enough it wasn’t a particularly emotional moment in the film that brought him to tears, but something else that you might have trouble believing happened.

It’s a well-known fact that green-screening is a method used in a lot of films these days. If you can’t get the actual effect you need then you turn to green screen. But in this case the Hobbit cast didn’t all get to be on the same set at the same time. This means that Gandalf had to be accompanied by photographs of the other actors dressed up as their characters for company. It was necessary to show the size difference between Gandalf and the dwarves apparently and anytime one of the pictures flashed that was who he was supposed to interact with. This stretched his acting ability to the limit and his emotional temperance past that limit.

He broke down and forgot that the microphone he was wearing was still on as he bemoaned that this was not why he’d gotten into acting. To be honest I can kind of feel for the guy since having to be on a completely different set than the other actors you’re supposed to be interacting with seems a bit exclusionary and unnecessary given the technology that is available today. Plus it seems like the budget might have been just as grand for the Hobbit movies as it was for the Lord of the Rings, so it seems more feasible that they could have found a way to shoot the lot together and then go back and do some clever editing.

I don’t know about crying over the scene but then I’m not much into crying so that could be just my own bias showing through. It does tend to take a little bit away from the movie now that we know that the bunch of them were rarely, if ever, on the same set together. The movie magic that’s so prevalent and so great dims just a little when you look beyond the curtain and start realizing just what goes into the films that are deemed to be so great. This one in particular strikes a rather sour chord since the character of Gandalf really didn’t cry all that often and was far more stoic than a lot of the other characters. I do recall that he cried in LOTR, but it was more out of sorrow for a lost friend than anything and not frustration.

When he’s frustrated Gandalf just gets more gruff and less apt to talk to people. But Ian McKellan is a deeply passionate man it would seem.