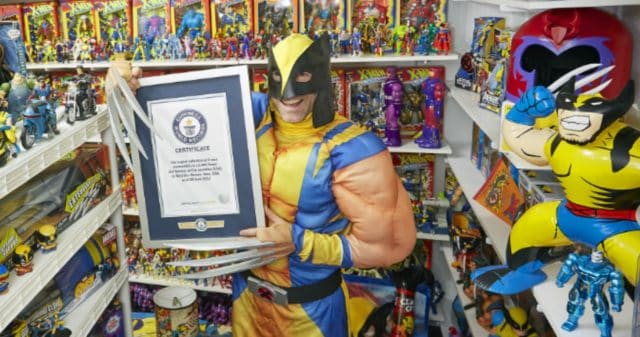 The X-Men franchise is one of the most lucrative in the entire entertainment industry. From comics to movies to action figures, its iconic characters remain some of the most popular of any genre. As such, there are thousands upon thousands of fans around the world who love the series. While many of these fans will wait in lines for hours in order to see the latest movie or get the newest comic, most won’t go quite as far as Eric Jaskolka. This X-Men super-fan recently had the honor of Guinness World Records officially stating that he has the world’s largest collection of X-Men memorabilia.

Jaskolka’s journey to achieving this incredible feat started many years ago when his Sunday school teacher introduced him to the series. He has stated that he began collecting the comics back in 1989, and started collecting toys as well in 1991. Since then, he has earned a reputation for his collection, doing numerous interviews and even writing articles for Tomart.

He has stated that his passion for the X-Men is rooted in a personal connection to the characters. While his favorite, like many of us, is Wolverine, his favorite aspect of the series is its diversity.

With the title of “World’s Largest Collection of X-Men Memorabilia,” it is obvious that Jaskolka’s collection is unlike any other. However, it is difficult to even fathom how large the collection is until you see the numbers. Apparently, his collection was recorded as having 15,400 separate pieces.

The collection, like the series, is quite diverse. While it obviously consists of many toys and comics, it also contains pieces like backpacks and candy. One would expect that it is difficult to keep track of this many items, but Jaskolka still knows his most treasured. He has stated that the prototype for an action figure which never saw production is probably his favorite.

What the Collection Means to Him

Some might wonder why a person would amass such an incredible collection. It does seem like a hobby which requires a large dedication of time, effort, and money over the years. For Jaskolka, however, the collection isn’t purely about the series. Instead, he loves it because it is something that his kids enjoy. He has stated that his kids are always excited to show their friends the collection, which gives him a special type of joy.

In addition, while the happiness of his children is the main benefit of the collection, Jaskolka does appreciate the world record title. When speaking about his new world record, he admitted to being proud. He was happy for his achievement to be recognized so that he had the opportunity to share it with more people around the world.

While there are thousands of passionate X-Men fans around the world, very few have the enduring passion of Eric Jaskolka. His massive collection of memorabilia has been amassed over several decades and now contains well over 15,000 individual items. It is a remarkable achievement, and earning “world record” status is an accolade that will likely stand out as one of his proudest.