Home
Movies
Horror
Wish Upon: Why It’s One Of The Worst Horror Movies Of The Last Decade 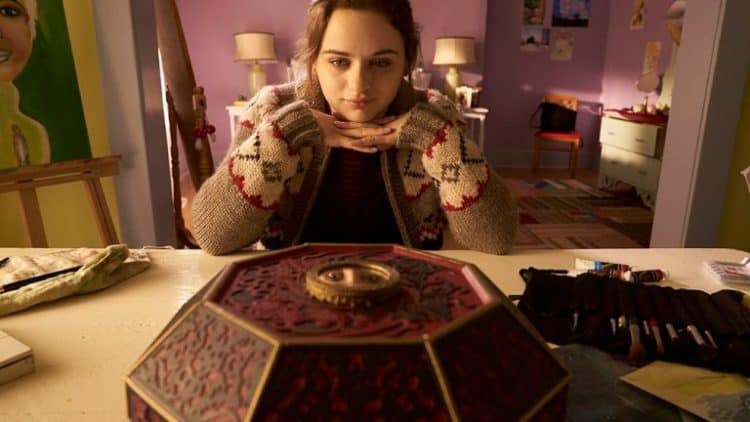 In the summer of 2017, there was a horror movie that was disliked by so many critics and fans that it was put on many of their worst of lists. The feature turned out to be Wish Upon starring Joey King as Clare, a 17-year-old who retrieves an old music box from her father. The old music box has the ability to grant seven wishes and Clare’s life starts to improve with each wish. However, the downfall of these wishes occurs when someone closest to her dies in a gruesome and violent manner. Now, the “be careful what you wish for” type premise is nothing new. From Death Dream to Wishcraft or the popular anime Death Note, the subject of wishes going wrong has been abused in many different ways. Or in the case of Death Note, wishes that spell the doom of other people. Still, there’s some fun to be had with the old gimmick, but unfortunately, that fun just isn’t found in Wish Upon.

The movie gives the protagonist the generic bullied storyline so audiences would instantly gravitate towards Clare Shannon. One of the main issues is that the filmmakers don’t understand that a character just being bullied doesn’t automatically mean that they’re a likable person. There are plenty of instances where bullies have differences that can make them sympathetic such as he/she has a miserable life thus they take their frustration out on others. Or if a bully is picking on a gay student, it may be the fact that he/she is gay themselves thus the reasoning for picking on that particular being. Clare is not a good person. In fact, Clare actually becomes a terrible human being as the film progresses. In the beginning, you understand her frustration and when her bully suffers the fate of one of the wishes then you go along with it. The key thing is that Clare never feels bad for anything she’s done. The bullying that Clare goes through is nothing more than elementary school tactics, so wishes of death or harm are a bit extreme. Clare never feels compassion once her bully rots. What’s worse is that when Clare does finally understand that the box is killing off these people, she still keeps making wishes.

This is actually an interesting morality that the film could’ve had fun with. A good girl who abuses her power and then suffers the ultimate consequences in the end, could’ve been a meaty storyline for Joey King. Her darkest desires clouding her judgment could’ve turned her into a great villain with a strong complex that you rarely see in many horror films. But the film never takes it in that direction. Clare is supposed to come across as sympathetic despite her consistently abusing her power without remorse, and the ending is supposed to be tragic because she still dies even though Clare fixed the situation. Oh, and I can’t let the laughable and terrible death sequence of Clare go unnoticed. The staging of this scene is laughably bad. Her being launched from the impact of the slow-moving truck felt like a mini recreation of the Fast & Furious 6 scene were Dom saves Letti. The difference is that the Fast franchise understands how ridiculous and over-the-top their action sequences are. Wish Upon does not. The awfulness continues with horrendous acting and the surprising lack of blood for such an impact. The crucial thing about the scene is that Clare ultimately gets what she deserves because of the deplorable choices that she makes. Her wishes are childish and extremely selfish. One of them is forcing the high school hunk to fall in love with her. There’s so much to say about that one wish alone. Okay fine, the story and characters are bad, but Wish Upon could’ve been somewhat saved with some cool death sequences. The problem is that this is a PG-13 film, so the movie isn’t truly allowed to have fun with its Final Destination style deaths. When part of the sale of your film is teenagers dying, then inventive and cool kills should be essential. Wish Upon isn’t a psychological feature like The Ring nor does it have the thrills of A Quiet Place or Cloverfield. Since the deaths fail to be entertaining, you’re watching a miserable slog packed with either bland or obnoxious characters, and a plot that does not know how to have fun with its premise. Wish Upon could’ve been bloody good fun. To be fair though, this is from the director of Annabelle and Mortal Kombat: Annihilation, so this film turning out bad shouldn’t be surprising.

Five Must-Watch Movies For Anyone New To Alfonso Cuaron