Home
Movies
Horror
Barbarian Looks Terrifying, and We Love It 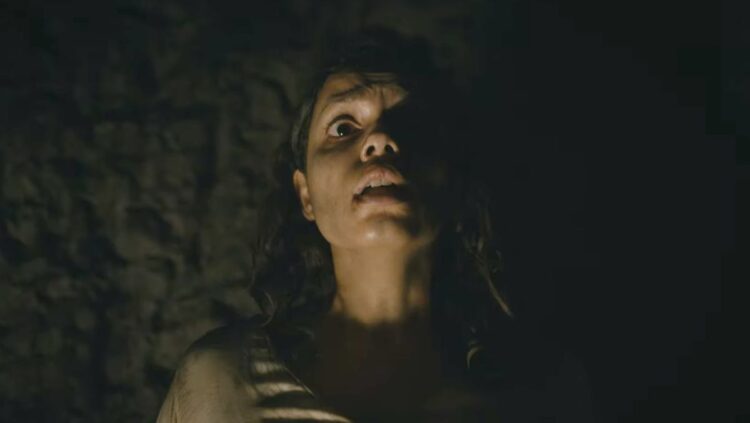 For some reason, there’s always this insane need to turn suburbia into a massive danger zone that filmmakers keep coming back to…and it’s great. Barbarian looks like a regular movie to start with, perhaps a story about how two people were booked for the same cabin and somehow decided to share their time rather than fight about it. But the trailer eventually turns into a nightmarish scene that shows the female protagonist descending a long, dark flight of stairs as the voice of the man she’d just met drifts up, screaming for help. Upon reaching the bottom it becomes evident that this place is some kind of torture chamber/prison where there might be a few less than savory experiments going on. From the trailer, this movie already looks like it might get intense, but from experience, it also feels that it could be something that looks great and turns out to be kind of ‘meh’. That’s a horrible way to look at things, but the truth is that it’s hard to trust horror movies sometimes since they tend to show us a great trailer and then fall down somewhere near the middle of the movie.

The trailer looks like something that’s been seen before, but there’s always a chance that the audience will get another thrill that they’ll remember for a while. Plus, Bill Skarsgard has been on a roll lately and it’s fair to think that he’ll put in a good performance, as will Georgina Campbell, who looks as though she’ll be heading up the movie as the main protagonist. From the outset it does look like this movie might start out simply and then build into something that will be uniquely twisted or something that will end up disappointing a lot of people. It’s a 50/50 shot either way, but the hope is that what we’ll see is something that will justify the terror that the thriller hides behind, or rather, beneath, the house that’s seen in the quiet, suburban neighborhood.

Setting a horror movie in a suburban neighborhood has been a horror trope for so long that it’s become rather commonplace, which means that there has to be an extra punch in there somewhere to get people really jazzed about sticking around for the entire movie. A secret prison/torture chamber in the basement of what looks like a normal house is definitely a strange and out-of-control idea, but it would appear that a lot of people are already thinking that it might be worth the time and effort. It already feels as though there’s going to be one hellacious twist that will be coming at some point in the movie, and that not everything is going to appear as what it is. Maybe it comes from watching too many movies like this, or simply too many horror movies, but something in the trailer does appear to be kind of off, which leads a lot of people to believe that something they’ve seen is going to happen, even if they don’t know when and how. The sad part about horror movies is that these days it takes something truly revolutionary to shock people, and even then it takes something that’s bound to last to keep that feeling.

Bill Skarsgard has already made it clear that he knows how to scare the hell out of people with the characters that he takes on, but in this movie, it’s tough to think of what he’s going to do. From the start to the finish it feels like it builds up to something that could be scary, but at the same time, there’s enough left out to wonder what the main point is going to be. The imprisonment, the apparent torture, that feels like it’s going to require a big explanation, and it’s one that people are going to be more than willing to hear since, well, people like that stuff. Something about a suburban neighborhood makes such places feel as though they’re ripe for ideas that can come from any direction when it comes to horror, and the overall look that many such neighborhoods have been given kind of lends the feeling of a warm, friendly facade that can be broken at any given time and allowed to give birth to one horror or another.

What will come from this movie is, as of yet, unknown, but there does appear to be promise in the dank, underground rooms, and hallways that have been shown in the trailer that something worthwhile might be discovered. From the trailer, it looks as though this might be a slow-burn type of movie that will lean heavily into the horror once it hits, but at the moment that’s more of a hope than anything. For now, reserving judgment feels like the best idea, since the movie will be here before we know it.