Home
Television
Why “Truth Seekers” Was Cancelled after Just One Season 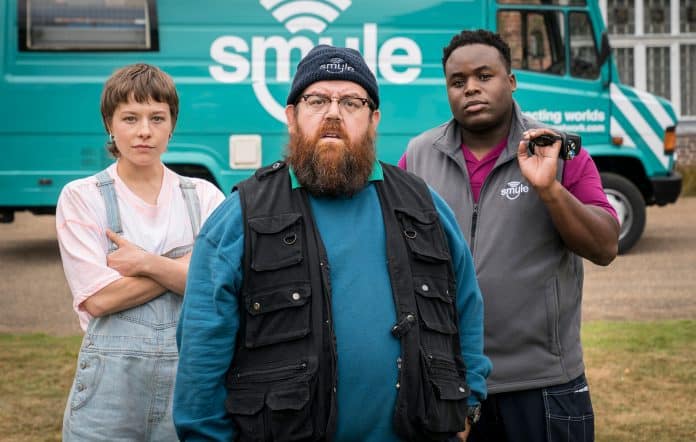 Seriously, it’s hard to say that a show featuring the paranormal is ever going to go out of style until the saturation point has been reached, and what’s even more confusing is that Truth Seekers wasn’t even the same as the found footage nonsense that comes around every now and then, or the highly-dubious shows that bring in the ‘experts’ that bring a very reality TV vibe to the whole thing. This show had promise, and while personally I wasn’t the most staunch supporter since it’s likely that people can experience fatigue from these shows, it was still fun to think about what Nick Frost would have done with this show and what it could have accomplished. It would appear that Amazong has no interest in pushing for a season 2 however as Truth Seekers has been canceled, never to return at the moment. Maybe cooler heads will prevail at some point, but as of now it’s done, over, finito, not to come back anytime in the near future. That’s a shame really since it did look like something that would have brought a bit of humor the paranormal research that so many are adamant is real and factual. The downside of this however is that far too many charlatains have come and gone over the years, and too many shows have continued to push the idea of the paranormal to really say that one more show is going to be the biggest hit around.

That’s the unfortunate truth really, people have seen this kind of thing more than once and it’s likely that they’re getting tired of it, not the actors per se, but the idea of a paranormal show that’s mean to serve a purpose. It would be accurate enough to say that season 6 of American Horror Story is still leaving a foul taste in some peoples’ mouths, but that was years ago now, and if that’s the case then folks might need to move on. It was an accurate estimation however since AHS: Roanoke wasn’t too far off the mark when comparing it to Truth Seekers, given the paranormal investigators that were seen in the latter half of the season. But still, paranormal shows have been a dime a dozen, kind of like reality TV, for a while now, and while this wasn’t reality TV it’s suffering the backlash all the same since it’s kind of a package deal in the industry with some subjects, as parsing them out isn’t always as possible as people might think. Some genres can be separated easily enough to keep them from becoming too much of the same, but anything paranormal requires an extraordinary effort to push itself apart from the rest of the pack, and sadly it doesn’t appear that Truth Seekers managed to do that.

Paranormal shows have been more than popular throughout the years, not to mention inspirational, but they’ve also kept doing the same thing over and over and over. Something, somewhere, or someone is haunted and the story goes that yada, yada, yada, blah, blah, blah, with a happy ending as the problem is solved or an ongoing legend that locals talk about and outsiders don’t know enough about unless it’s in the history books. And the reality TV aspect is the worst of it, since there are too many ways to doubt, too many anecdotes that come into play, and far too many individuals that play up to the camera to make certain that their tales of fright and terror are taken for the real thing. It’s a strange world we live in, and thinking that the things that go bump in the night all have a reasonable explanation is a foolish notion at best, even if it’s true sometimes. There are strange happenings and occurrences in this world that make it easy enough to believe in an afterlife, in residual energy, in ghosts, and many othe strange things that many people don’t understand, but when it comes to entertainment, it wears thin very quickly unless a show can do something to revive the interest and perk up the experience in a way that audiences will be glad to pay attention to. It’s hard to believe that anything that Nick Frost and Simon Pegg do can’t bring that level of interest up, but after so long it does feel as though they’ve met their match, at least for now.

The paranormal is still a very interesting subject, and it’s hard to see why Truth Seekers wouldn’t continue to garner interest after looking closely at everything on Amazon’s menu, but since the lot of us aren’t in charge and don’t have any say in what happens, we’re going to have to say goodbye to this show, at least for now. Maybe one day someone will realize that they had a gem that was too good to toss out and it won’t be too late to get it back. But don’t hold your breath just yet.