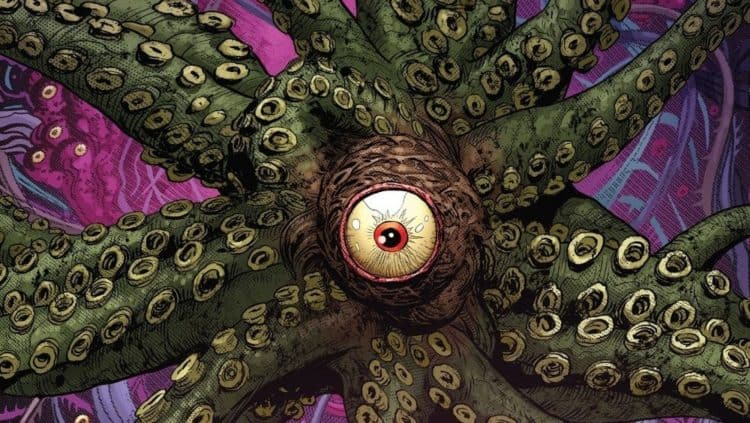 This would be a tricky character to push in the MCU since Shuma Gorath is essentially a god-like demon that has been encountered by several people in the Marvel universe, Conan the Barbarian being one of them, but hasn’t been seen as a localized threat as Thanos and many others have been. The truth is that this demon entity can destroy worlds without needing the Infinity Stones and has an aura that can wipe out entire galaxies if it so desires. It takes such a tremendous amount of effort to keep Shuma Gorath contained that killing it doesn’t even appear to be possible. This is the type of entity that even someone as powerful in the mystical arts as Doctor Strange can’t take on his own, as the demon was around when the universe began, as it likes to boast so often, and will likely be around for several more cycles after that given that the creature is something that is hard to fathom when it comes to telling just how long it’s been alive and what it can really do. This is why plugging this idea into the MCU would be kind of an issue, since creating a scenario in which Shuma Gorath would be the big bad is easy, it’s getting the story to work that would be hard.

Well, not so much hard as it would be tricky. Something of this scope could definitely be put into a movie, but a series might be troubling simply because Shuma Gorath is hard for a lot of people to relate given that its role in the Marvel universe is that of a destroyer and it’s not bound to change. This demonic creature is something that lives to cause pain and destruction and because of that, a movie might actually be the better idea, or perhaps a limited series would work, but an ongoing series just doesn’t sound like the best option. It would definitely be something that might be a great story for Doctor Strange to engage in since he’s one of the primary enemies that one tends to think of when it comes to this type of thing, but learning that Conan had something to do with this creature as well is kind of interesting.

If Conan were brought forth though it feels more likely that it would be effective as an animated series or a movie simply because a lot of people would probably pipe up that a Conan movie without Arnold Schwarzenegger wouldn’t be something that people were interested in. That was already attempted with Jason Momoa, and while there’s every indication that this should have worked, it somehow fell apart in such a way that people were willing to forget the remake of Conan the Barbarian and stick with the original. But in terms of pitting him against Shuma Gorath, it would be necessary this time to actually bring in the god of Conan’s people, Crom. This is because as strong and capable as Conan is, he’s still human, and isn’t about to do anything against something like Shuma Gorath since the sheer magnitude of the creature makes it pretty much impossible. And despite Conan’s own moderate intelligence, he’s not quite as adept as others when it comes to battling this type of creature. How awesome would it be to see a depiction of Crom though?

To be honest, bringing Shuma Gorath into the MCU does feel as though it should be treated as something that would be a world, or galaxy-changing event, and should be able to bring in other characters that might be threatened by the creature as well. This could bring on other cosmic heroes and villains that would be forced to band together to fight the creature or to become its lackeys since it’s fair to say that some villains might want to harness the power that Shuma Gorath has or even see if they can find a way to bind the demon and use it to their own ends. That would be a tall order no doubt since Shuma Gorath is insanely powerful but not overly intelligent compared to other individuals in the MCU, which is kind of surprising since one might think that something so old would have gained a bit of wisdom at this point.

But with that in mind, bringing to bear so many other characters would be great since it would allow the MCU to continue to expand and it would give fans even more characters to get into since this kind of threat would be greater than just one team, even if they were the size of a grand army. One other thing that would be cool about this is that Shuma Gorath is pretty cut and dry when it comes to the creature’s motivations. It just wants to destroy, no questions asked.