Home
Movies
Why Politics is Necessary in Movies 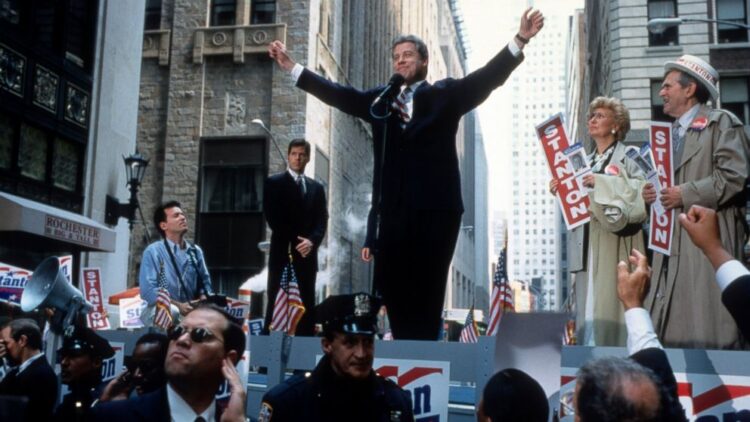 It’s kind of amusing how much some folks want to grouse about politics in the movies and yet how quickly they’ll take to watching said movies since like it or not, politics is another tool that’s useful in cinema. To be fair, the way that some politicians are seen to lean in the movies isn’t always enjoyable since a lot of folks want to see their views represented when it comes to anything political, and they’re usually bound to get a bit upset when they don’t feel ‘seen’ by a movie’s message. Cue the violins and break out the boxes of tissue in some cases, since some folks think that politics don’t belong in the movies, but the reason that’s laughable at best and dangerous at worst is because they absolutely belong in the movies. It’s not hard to think that when an actor takes on the role of a politician, be they fictional or real, that some people will claim that they can’t believe that the actor did such a thing, that they accepted such a role. But there will be others that think that it was either great or ridiculous. But the wisest among us will admit that politics are necessary for the movies since much like reality, they’re another tool to be used.

When one sits down and thinks about it, politics is kind of ridiculous since we tend to hold popularity contests every four years to see who gets to run the country based on the things they say, what they promise, and how appealing they are to the American people. But if anyone ever took a really good look at those who have held office over the years, they might take note that not many of them have won on merit alone, no matter what anyone wants to say. What the movies, and TV, do when it comes to politics is like holding up a very flawed mirror to show people that no matter what side they cling to or what set of ideals they follow, the political arena that so many cling to is just as flawed as anything else.

If cinema couldn’t claim a hold on politics in any way, or if politics was able to be used to stifle any representation of those who operate the country, it would become an even greater hypocrisy that we’re living under. Seriously, if we can’t laugh at, look up to, or be impressed by anything political in nature, then a good chunk of cinema is simply gone. Many action movies would become pointless, a lot of dramatic movies and shows would lose a lot of their meaning, and to be fair, Hollywood would have to actually think up ideas when trying to be funny. Perish the thought, right? The fact is that politics are necessary for cinema, no matter that they sometimes push views and ideas that might not be appealing to everyone. If that’s the measure by which a movie is judged though, it’s easy to think that too many people have been tricked into thinking that there’s an area of separation between cinema and politics. Much as I hate to repeat those that have been saying the same thing, the neutral zone does exist, but it’s a wasteland that few people would want to venture into.

To be frank, placing politics in a movie is like adding another layer to a cake. It might not be the most important layer, unless the movie is meant to be a political thriller, comedy, drama, etc., but it’s there because it helps hold something else together and is needed to put the story together in a complete manner. There are plenty of movies in politics more of a byproduct than a needed element, but in a lot of features, it’s seen that there is a need for politics of some sort, even if they’re the most twisted and unstable practices ever conceived. When looking at the definition of the word it’s very easy to see how this element can’t be avoided, since the moment one person acts against another it’s bound to happen that politics will be included in some way, shape, or form. How this element is handled makes all the difference as to whether people will accept it or not, but whether folks want to admit or deny it, politics has a part in just about every movie ever made in some fashion.

A lot of people won’t want to hear this and will seek to deny it. I don’t blame them, I’m not a fan of politics taking over either. But accepting the truth, that they’ll always be a part of cinema in some way, is better than being naive enough to think that a movie is better off without them. That simple realization is often enough warning for many people when it comes to expecting some form of political influence to be seen in any given movie.