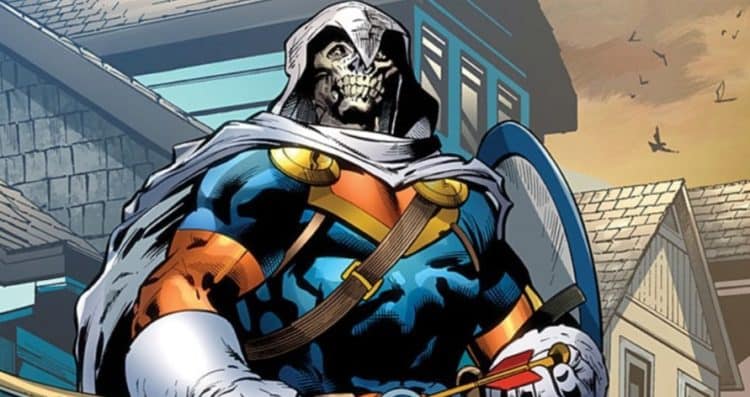 If there’s one super-villain that can take on pretty much anyone in terms of martial skill it would be the Taskmaster. Out of so many others he’s one of the few that doesn’t have any supernatural abilities of his own but can still go toe to toe with the likes of Captain America, Hawkeye, and many, many other heroes that might be able to overwhelm a slew of opponents that are well beyond the average thugs. The only problem with giving Taskmaster his own movie however is that a lot of people outside of Marvel fans don’t really know who he is. He’s shown up in games and been in numerous comics, but he hasn’t yet been created as a huge presence that could be used as a means of challenging those in the MCU. That kind of needs to change, and it could possibly help the next phase of the MCU if they were to take this character and develop him.

Now granted, he couldn’t really take on Captain Marvel and expect to win in a head to head match since her power is simply too great for a villain that doesn’t have the power base that other characters do. But in a non-powered fist fight he can dish out some serious pain. The reason why he’s such an impressive character is that he can mimic the movements and combat styles of those he witnesses and then employ those attacks without fail. In fact in the comics there haven’t been a lot of times when he couldn’t take on a character after watching their movements. Jocasta of the Avengers was too much for him since he’d never seen her movements, and the only character that’s ever given him a serious number of problems was Deadpool, since his manic actions are simply too hard to gauge and there’s no predictability to what he’s going to do. Apart from that, Taskmaster is perhaps one of the most dangerous villains since he has no morals apart from those that come from being employed by one super-villain or another.

The act of giving him a solo movie doesn’t seem as though it would be as well-received as others might, largely because he’s not well known to many people. But if he was to be given a movie that featured someone more famous than he is, or was perhaps made into the big bad of a particular movie, it could be a lot of fun. In fact, putting him against Deadpool could be fun since it seems like it would be a more even fight. At this point going against a team like the Avengers would be interesting since the roster has changed a bit since Endgame, and those left might not pose as much of a problem to him as he’s been known to stand toe to toe with some of the best fighters on the team and do quite well. Think about it, someone that can match Hawkeye shot for shot, stand and slug it out with someone like Captain America, and can even take on Iron Man and last for more than a few seconds. That’s a tough and extremely skilled individual, not to mention the fact that he does operate at peak performance and could give just as good as he got.

Starring in his own movie might be a stretch at first, but not if he was introduced into another movie first and given a good representation that could introduce him into the MCU. Matt Morrison of ScreenRant has even talked about him being introduced in the upcoming Black Widow movie. Given that he’s had run-ins with a few superheroes it would be kind of interesting to see where they might put him if the decision was made to do so. While he’s definitely capable of taking on many heroes it might not be the best idea to put him up against anyone that has the kind of abilities that can squash anyone that’s basically a regular human with elite skills. So it doesn’t seem that putting him against the X-Men or Deadpool would be the best idea at first, though those ideas are kind of intriguing as well. Putting him up against a new team of Avengers might be the best bet since quite honestly this seems to be where he’s been able to show up the most and have the best impact. It would probably be a while however if such thing were to happen, since Endgame is likely going to be a big sting that a lot of people have to get over for a while, kind of like Infinity War. It could be worked in as a necessity however that Taskmaster needs to be dealt with since he has been known to open schools that cater to the training of criminals and thugs. That sounds like something the Avengers might see as worth their time.

It might take a while, but it’d be great to see the Taskmaster on the big screen.