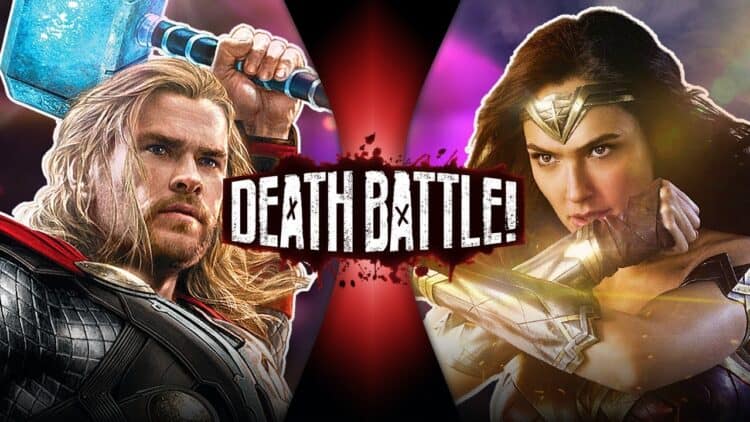 This fight has been determined in a couple of different ways by those that figure that the two characters have their own ways to gain victory. But the fact is that many feel that Wonder Woman, who could very easily be seen as worthy by Mjolnir, could take advantage of this and summon the hammer, taking Thor unaware, and ending the fight without fail. That’s cute and all, and it’s something to consider, but at the same time, it’s not something that Thor, who has centuries of fighting experience behind him, would simply allow to happen. To say that both combatants are tactical in their approach and are highly skilled is accurate. But, indeed, Thor often wades into battle recklessly as he relies heavily on his strength and his durability to maintain his safety and dominance. Too many people are ready to say that without their weapons, both combatants would find it nearly impossible to beat each other. Some would even say that if Thor takes advantage of his rage that he would be easily dispatched since Diana is far more composed. It’s funny how people don’t realize that Thor is a god at his base level, and Diana is a demigod that might have touched divinity a time or two but isn’t a goddess in her own right.

What’s true is that both combatants are insanely powerful and have the advantages that they bring to a battle. Thor takes the lead in durability, but not by much, while Diana’s speed is a bit greater than the thunder god’s. Some would say that in a hand-to-hand battle Diana would be able to annihilate Thor, but one has to recall that Thor isn’t a thuggish brute that’s bound to throw ham-handed strikes at Wonder Woman the entire fight. He might not be much for the martial arts, but his speed isn’t so poor that he wouldn’t be able to hit her at all, especially if Thor was taking the fight seriously. Granted, Diana might land four or five punches to Thor’s one, but the kind of damage they would do pales in comparison to what would happen when Thor connects with one solid blow.

She might not crumble into a heap, but Wonder Woman would feel every bit of every single punch that landed squarely since Thor is not a weakling and has been fighting larger and far more durable opponents in his time, meaning that Diana isn’t going to simply tank every hit that Thor sends her way. When it comes down to weaponry, Diana has more options in her arsenal, but Thor’s single weapon isn’t anything to be laughed at since not only does it return to him when thrown, but it helps to channel the true power that has been his since birth, and it’s been shown more than once that he’s insanely accurate with that power. It’s fair to think that not every lightning strike would land if Thor started channeling one bolt after another as he did in Thor: Ragnarok, but even a brush with one of those furious bolts would be enough to throw Diana off just a bit, since like it or not, both combatants are flesh and blood, but Thor’s lightning doesn’t often affect him as it does others.

The arguments about this fight are kind of amusing since it does come down to who’s doing the writing and whether their own bias is going to come out and make it possible for one side or the other to triumph because of one element or another. A lot of people will turn to this practical way of explaining things when they fail to convince others of the veracity of their words, but the truth is that it does fall in the writer’s lap who is going to win and who is going to be standing, triumphant, over the fallen. In this case, Diana’s speed is insanely impressive, but whether it can trump Thor’s durability is kind of tough to say since the thunder god has taken hits from enemies that could tank Wonder Woman without fail. Stating that Wonder Woman could nearly take out Superman isn’t that impressive since Thor and Superman have gone toe to toe and it was easy to assume that either man could win at one point.

There’s a reason why Thor would take this fight more often than Wonder Woman, and it’s rather simple. He’s a god, born and raised, and his battle prowess might be different than Wonder Woman’s, but it’s no less impressive. Also, while they both have access to immense power, Thor can tap into the Odin Force, meaning that he can surpass Diana quite easily. At the end of the day, Thor is a fully-fledged god all the time, while Diana is a goddess that has touched greater power but is going to be edged out more often than not when Thor becomes serious about the threat she poses.