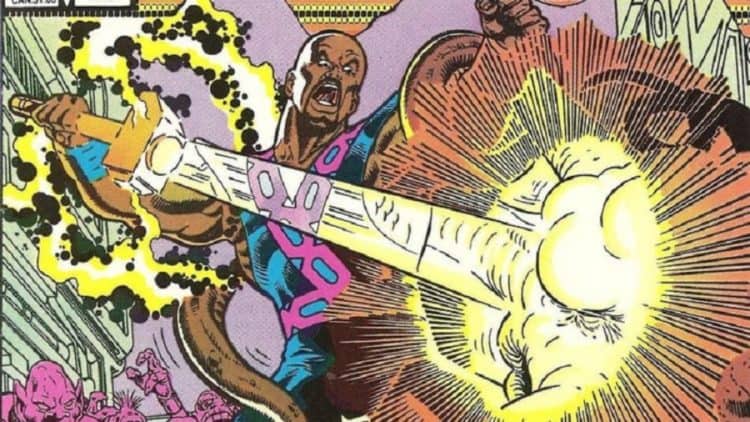 Phastos is quite a bit different when it comes to other Eternals since he’s not all that willing to fight, even though he will if pressed. Plus, he’s usually been seen as rather melancholy since he wants to believe that there’s some other purpose to life that he and the other Eternals simply don’t realize yet. Because of this, Phastos is one of the more perplexing characters in the Marvel universe since he is insanely powerful but he doesn’t use this power for much more than creating various items, including weapons, but he has no real intention to use them that often unless he absolutely has to. Some folks might claim that this is a big point in his favor, while others would likely state that while it’s an interesting quirk, it’s not necessarily one that would make for a great solo movie. Or maybe it would and I’m just not thinking broadly enough since the movie The Book of Eli comes to mind with Denzel Washington playing the part of the wanderer that doesn’t want to fight but can definitely throw down when he feels the need. In fact, maybe Denzel or his son David Washington could even take on the role and make it into something great since both of them have found a great deal of success in their careers and are able to take a character and make them work for the audience.

At some point, we might start talking about other heroes and villains and the possibilities of seeing them in solo movies or series on Disney+, but at this moment The Eternal are being put on display since they’re the stars of one of the biggest movies coming to the MCU and as a result, it’s best that people get to know as much about them as possible. Phastos is one of those that does have a history but doesn’t necessarily bet mentioned quite as much as the other Eternals. It’s odd that the technical genius among them doesn’t really appear to garner that much attention, but then if one thinks about it Batman is usually thought to create most of his own equipment and gadgets when in truth it’s been Lucius Fox for so long. But his character definitely appears to be more brooding and less upbeat than any of the others, so perhaps its the desire to keep Phastos from bringing down the energy level in the room that keeps him from being mentioned too often. But if his story managed to be picked up it could make for an interesting series, a limited one, on Disney+.

As I’ve stated in other articles it’s going to be necessary to get to know these characters before deciding whether or not they deserve a solo outing since it’s been seen with some individual members of the Marvel universe that the fans just don’t respond to them in the same way. Part of it could be that they’re just not as popular, or not as well-developed, and it could even be that they’re just not that interesting for whatever reason. After all, various characters in the comics appear to be there just as fillers and support rather than as actual characters that might take on their own story. When it comes to reading about the Eternals it almost feels that each one of them is meant to have a well-defined and very important story that is meant to integrate with the rest of their group. But in the movie can easily imagine that this isn’t going to be the case since they might all be introduced and they might all have something to do with the main point of the story, but it’s easy to think that only a few of them are really going to affect the outcome in any significant way. Trying to predict who’s going to be the most popular member of the group when the movie comes out isn’t just hard to do, it’s nearly impossible without knowing just how many people know about the Eternals in the first place.

To make the argument though, Phastos could be seen as the individual he’s already been described as someone that will wander the earth in an attempt to find deeper meaning while doing what he can to help at times and keeping away from humanity at others. This is a type of story that’s been revealed more than once in the past and it does work if the filmmaker is skilled enough at telling the story, and if the actors selected can make it come to life. But otherwise, it does feel as though Phastos might be a character that doesn’t get a lot of attention and might be headed for obscurity when it comes to the MCU. Hopefully, some argument can be made for another story, but we’ll see.